I think it's about time to review Apollo 18, which has a special place in my heart as my first They Might Be Giants album. True, I bought it and Then on the same day, and I'd heard all of Flood before that, but that's still how I think of it. It also has one of my favorite album covers of all time: 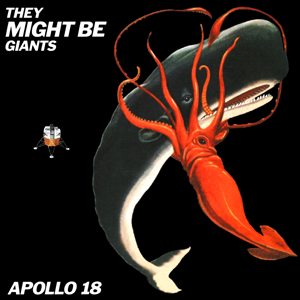 I understand that the Johns got this image from a pulp science fiction magazine. I have to wonder if it relates to Arthur Clarke's Childhood's End, in which a man stowed away to another planet in a display made up of a squid fighting a sperm whale. Maybe not, but that book DOES have the aliens arrive in a silver spaceship.

Anyway, enough with the cover, and on with the songs!

Hey, two entries in a row on my friends page mention Sarah Palin. One is about how she hates science, and the other about how the McCain campaign is angry at her not following the script. So they want her to be in a position where she could be President at any time, but they don't trust her to decide what to say on her own? Could they make it any more obvious that they only want her as a figurehead? But then, I guess the President and Vice President are essentially figureheads anyway. I mean, sure, they have considerably more power than, say, any twentieth century Emperor of Japan, but their main function is a largely ceremonial one. It does bother me how pretty much ALL politicians feel they have to stick to the script, but I guess they'd never have a chance of being elected otherwise.

slfcllednowhere posted an article about Obama that was written by a conservative columnist as a joke, but was later forwarded through e-mail as if it were real. Here's one selection from it:

Senator Obama Live on Sunday states, 'As I've said about the flag pin, I don't want to be perceived as taking sides, Obama said. 'There are a lot of people in the world to whom the American flag is a symbol of oppression. And the anthem its elf conveys a war-like message. You know, the bombs bursting in air and all. It should be swapped for something less parochial and less bellicose. I like the song 'I'd Like To Teach the World To Sing.' If that were our anthem, then I might salute it.'

Really, though, flag lapel pins DO bother me. Flag worship in general does, for that matter. Besides, if you really care about the flag, isn't it kind of lessening its significance to use it as a fashion accessory? I'd appreciate a candidate who actually DID denounce those stupid pins, but you know there would be people who would get angry about that.

And for my final political topic of the day (I think), I find Palin's talk about "special needs children" to be rather patronizing. I get the impression that it's something she's so keen on bringing up because it's something no one is likely to come out against. But hey, maybe I think ALL children have special needs. It's not like only kids with Down Syndrome are suffering from the impersonal mass-education system, or need help to get ahead in life.

Yes, this is my third post today, and I still have another one in mind. I might wait until tomorrow to actually write it, though. For now, I'm going to take a look at the final four episodes of The Adventures of Super Mario Bros. 3.

Overall, while the series is hardly great television (or really even GOOD television, for that matter), I do appreciate how much of the game they managed to work into the show. Each one of the worlds from the games shows up, as do most of their rulers (although we never see the leaders of Water Land or Pipe Land) and many of the power items. Super Leaves, Fire Flowers, Starmen, and Frog Suits all show up pretty often. There are even episodes that feature P-Wings, Kuribo's Shoe, and a music box (although it doesn't quite work like the ones in the game). The disguises that Mario and Luigi wear in "Reptiles in the Rose Garden" MIGHT be Hammer Suits, but if so, they never use their powers. Unfortunately, Tanooki Suits never show up at all, and I think it would have been cool for a Warp Whistle to have made an appearance. As far as the enemies go, we see a lot of them, including some relatively obscure ones I don't think have appeared since SMB3 (Boom-Boom, Rocky Wrench, Hot Foot, etc.). And the minor enemies occasionally talk, which I always liked, even though most of them sounded pretty similar. I think the main SMB3 enemies (or at least the ones most memorable to me) who were never used in the show were Boss Bass and his female counterpart Big Bertha. Bertha actually had some major roles in the Valiant comic books, but not in the cartoon.

As far as this reviewing goes, I think I'll finish up with the second season of Captain N, and then move on to Super Mario World. Until then, everybody, do the Mario! Or the Koopa, if you prefer.
Collapse