In our continuing look at Oz characters, we come to the odd case of Professor H.M. Wogglebug, T.E. The initials, which were self-applied, stand for "Highly Magnified" and "Thoroughly Educated." The latter refers to his time listening to lectures at Professor Nowitall's one-room schoolhouse, and the former to how he was caught and magnified by the Professor for the purposes of examination. The Wogglebug left the schoolhouse while in magnified form, and went on to join up with the main adventuring party of The Land of Oz. I have to wonder if the magnification bit was inspired by a similar occurrence in Lewis Carroll's Sylvie and Bruno Concluded, in which a bug is magnified physically while under a projector.

As for the Wogglebug's personality (or would that be "insectality"?), he was obviously intended to be rather annoying. He's pompous, pedantic, sometimes openly rude, and prone to making puns so bad that even other Ozites hate them. But for all that, he still has his helpful moments, and times when he turns his education (however thorough it may or may not have actually been) into to practical applications. He's the one who deduces that the Sawhorse's broken leg can be replaced with one of Jack Pumpkinhead's, and his strong stomach makes him the only member of the party who can successfully swallow wishing pills. In fact, it's rare that a protagonist in an Oz book is ever totally useless. I think the army officers in Ozma and Tik-Tok might be the closest we get to characters who are entirely comic relief, and not at all useful. Make of that what you will. Anyway, as someone who sometimes can't help identifying with the buggy one (especially when it comes to the puns), I appreciate that he isn't a total buffoon.

So what is a woggle-bug, anyway? Well, the name apparently came when a child asked L. Frank Baum to identify a crab on the beach (see here for details), but the character who made it into the Oz series definitely isn't a crab. Here's how he's described when first introduced:

Tip had not yet taken his eyes off this wonderful personage. What he saw was a great, round, buglike body supported upon two slender legs which ended in delicate feet -- the toes curling upward. The body of the Woggle-Bug was rather flat, and judging from what could be seen of it was of a glistening dark brown color upon the back, while the front was striped with alternate bands of light brown and white, blending together at the edges. Its arms were fully as slender as its legs, and upon a rather long neck was perched its head -- not unlike the head of a man, except that its nose ended in a curling antenna, or "feeler," and its ears from the upper points bore antennae that decorated the sides of its head like two miniature, curling pig tails. It must be admitted that the round, black eyes were rather bulging in appearance; but the expression upon the Woggle-Bug's face was by no means unpleasant.

For dress the insect wore a dark-blue swallowtail coat with a yellow silk lining and a flower in the button-hole; a vest of white duck that stretched tightly across the wide body; knickerbockers of fawn-colored plush, fastened at the knees with gilt buckles; and, perched upon its small head, was jauntily set a tall silk hat.

Standing upright before our amazed friends the Woggle-Bug appeared to be fully as tall as the Tin Woodman; and surely no bug in all the Land of Oz had ever before attained so enormous a size.

The educated insect is said to have obtained the clothes when he saved the ninth life of a tailor (which provided a jumping-off place for one of the prolific Fred Otto's short stories, "The Woggle-Bug's New Clothes"). Baum doesn't really specify how many limbs the bug has, but kind of makes it sound like only four, which is unusual for an insect, but Neill drew him accordingly.

In the Queer Visitors from the Marvelous Land of Oz Comics, however, Walt MacDougall drew him with six limbs, and Baum wrote the character accordingly, occasionally referring to his four arms. In The Woggle-Bug Book, a spin-off of the series, he even has wings. While I don't consider these writings canonical, I admit to being intrigued by the idea that the Wogglebug might have two extra arms under his clothes, and possibly wings as well. Perhaps he conceals them so as not to look TOO disturbing to others. 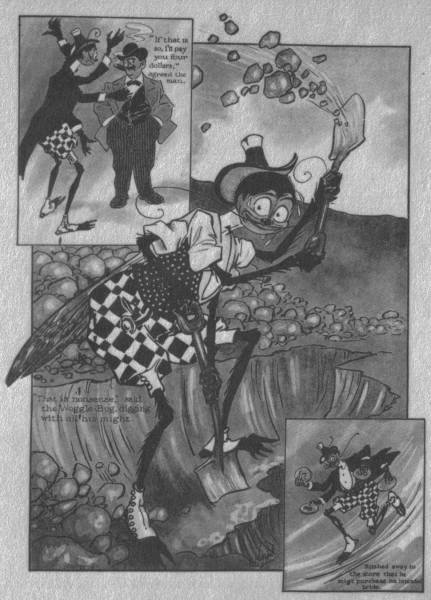 While the insect ended up becoming somewhat of a second-tier character in the Oz series, it wasn't always that way. After his significant role in Land, he went on to be the unofficial leader of the group of Ozites exploring the United States in the Queer Visitors pages. Early on, these stories would end with the Wogglebug displaying some of his vast knowledge, and readers were encouraged to guess what the Woggle-Bug said. "What Did the Woggle-Bug Say?" was marketed as somewhat of a catch phrase, being printed on buttons and even made the subject of a song. I'm not sure just how popular the phrase was, but it was apparently enough so that a beer company thought it worthwhile to rip it off. The bug was also the title character of the stage version of Land, but the play was not particularly successful. Maybe that's at least partially why Baum took him out of active adventuring and into the world of academics, making him the head of the new Royal College of Art and Athletic Perfection (which is known by several different names throughout the series). The college is introduced in Ozma, and most fully described in Emerald City. Students learn by taking education pills invented by the Wizard of Oz, and devote the rest of their time to athletic pursuits.

After this, Professor Wogglebug's main role in the series is that of the fairyland's main scholar. He's credited with drawing the map of Oz, inventing the square-meal tablets that provide the same amount of sustenance as a full meal (another Baum creation that later became a science fiction staple), and writing chronicles of the history of Oz. His main roles in the post-Baum books are in Royal Book, Wonder City, and Runaway.

annamatic did this meme wherein you request to play and are given 3 people to whom you must assign one role each: do you marry them, shag them, or throw them off a cliff? Post pictures of your candidates in your response.

If you want to do this, let me know, and I'll do my best. Also, let me know whether you want guys, girls, or both.

Oh, and happy birthday to