I saw Jenny Lewis live for the second time last night. The first was back in 2006, when she was on tour with the Watson Twins for her first solo album, Rabbit Fur Coat. That was at the TLA, while this was at the Trocadero, which I actually like better, even though I'm pretty sure it's smaller. It's more conveniently located, and has more seats on the balcony. The show attracted a small crowd, which isn't to say that there weren't a lot of people, but that a lot of the individual people were small. I kind of felt like a giant while in line. But anyway, the openers were Farmer Dave and Deer Tick, neither of whom were particularly memorable. About all I really noticed was that the lead singer for Deer Tick had a really gruff singing voice. Two openers are too many, really, but at least I didn't have to stand up for them (which most people did; I was lucky enough to get a spot on the balcony before it filled up). Jenny came out in a T-shirt and jeans, and she was as cute as ever. (That sounds kind of cheesy, doesn't it? True, though.) The songs that I can remember her playing were:

See Fernando
The Charging Sky
You Are What You Love - I've had this song stuck in my head quite a bit recently, so I'm glad she played it.
Pretty Bird - She dedicated this to the inflatable duck given to her by Deer Tick.
Just Like Zeus - A new song, which she introduced as being about getting the clap from Lindsay Lohan, and then apologized for being mean. {g} There was another new song in the set as well, but I don't know what it was called.
Carpetbaggers - I like this song, even if the tune for the verses sounds a bit unoriginal.
Jack Killed Mom - One of the songs on which Jenny played keyboard instead of guitar
Rise Up with Fists
Happy
Handle with Care
Silver Lining - She did this with just the two percussionists for accompaniment, and sang the bass solo.
Born Secular
The Next Messiah - Why is this song so long? Oh, well.
Bad Man's World

Despite being near the bar, I didn't have anything to drink during the show, and my throat was parched by the time I got out. I tried to get a drink at the Wawa across the street from the venue, only to find it way too crowded. So I got an orange soda out of the vending machine at the parking garage instead. I wish it were easier to find diet orange soda, both because I'm trying to cut down on sugar, and because it's not as sickeningly sweet but still has the flavor. I'll also drink Sprite Zero, but it doesn't really have as much flavor as regular Sprite. Actually, I think it kind of tastes like 7-Up, while Diet 7-Up tastes like ick. Well, at least it did the one time I tried it. But I'm getting off topic here, so I might as well end this now.

You didn't think I'd forget to feature an Oz character this week, did you? This time around, it's the Frogman, the second protagonist to be an oversized animal. The first was the Wogglebug, and the two of them would later be joined by Wag and Percy. But for now, our focus is on this little green frog who was dropped into a hidden pond on the Yips' hilltop tableland, where he grew abnormally large and intelligent by eating of the magic skosh. (I believe the current meaning of "skosh" as "a little bit" originated in World War II, so it was probably just a nonsense word for Baum.) He then started wearing clothes, as described in the text of The Lost Princess of Oz:

"The Frogman's usual costume consisted of knee-breeches made of yellow satin plush, with trimmings of gold braid and jeweled knee-buckles; a white satin vest with silver buttons in which were set solitaire rubies; a swallow-tailed coat of bright yellow; green stockings and red leather shoes turned up at the toes and having diamond buckles. He wore, when he walked out, a purple silk hat and carried a gold-headed cane. Over his eyes he wore great spectacles with gold rims, not because his eyes were bad, but because the spectacles made him look wise, and so distinguished and gorgeous was his appearance that all the Yips were very proud of him."

He was also made the leader of Yips, and gave advice and settled disputes for them. Eventually, he gained a reputation for being much smarter than he really was, which he was all too glad to perpetuate. When he accompanied Cayke the Cookie Cook on a search for her lost Magic Dishpan, he had the idea that his wisdom would spread throughout Oz, but it turned out that most other Ozites did not have the same respect for the amphibian that the isolated Yips had. What's more, he accidentally bathed in the Truth Pond, which forced him to reveal that he wasn't anywhere near as wise as Cayke and the other Yips thought he was. He was still quite helpful in the defeat of Ugu the Shoemaker, however, and went on to visit the Emerald City for an extended period of time. In fact, Glinda identifies him as part of Ozma's council. It's not entirely clear whether he is perpetuating his visit from back at the end of Lost Princess, or just drops in from the Yip Country from time to time, but it does seem that Baum intended for him to become a fixture in the roster of Ozian celebrities. None of the other Famous Forty authors really used him, though, aside from a brief mention in one of Jack Snow's books, so he ended up becoming somewhat of an obscure character despite his promising beginning.

Not surprisingly, some post-FF authors have written of the further adventures of our froggy friend. March Laumer has a book called The Frogman of Oz, in which the enlarged amphibian plays a major role, and ends up pairing up with Gayelette, who had been given the form of a giant frog by Mombi. Laumer also gives the Frogman's name as Frederick Fruakx, despite the fact that Baum claimed "the Frogman" was "the only name he has ever had." Eric Shanower wrote a short story called "The Final Fate of the Frogman," in which the powers of the Truth Pond eventually force the Frogman to stop behaving in a human manner, and he ends up guarding the pond to make sure no one else suffers his fate. It's a well-written story, but I have to say I feel sorry for the poor Frogman. At least in a magical land like Oz, I suppose there's always a chance of redemption for the amphibian. 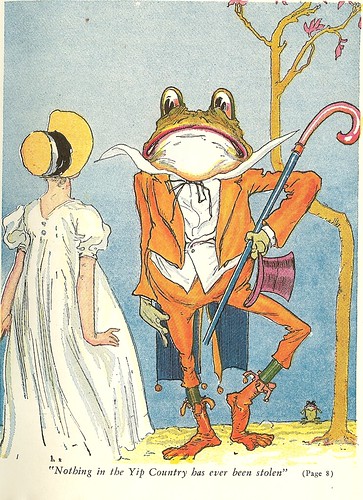