The instruction booklet for the original Super Mario Bros. refers to Princess Toadstool (later to be called Princess Peach) as the daughter of the Mushroom King, but her father is not to be seen in this game or any other. He doesn't show up in any of the cartoons either, and some of them suggest that the Princess is the sole ruler of the Mushroom Kingdom. In the comics and the books based on them, however, the Mushroom King shows up regularly, and is depicted as a total idiot. 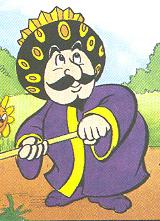 I've heard that King Toadstool's look was modeled on the King of Grass Land from SMB3, and I guess there is a resemblance. It seems that Grass Land is often regarded as the same as the Mushroom Kingdom, which does make a certain amount of sense. Grass Land isn't exactly a grassland in the traditional sense of the word anyway, since it's full of hills and cliffs.

Even the media that give the Princess father don't give her a mother. For some reason, it seems to be common in fictional royal families for kings to be single parents of eligible young daughters. I think it's common in the Zelda games (as well as the cartoon) for Princess Zelda to have a father, but no known mother. This is also the case for Gwaelin in the first Dragon Quest game, and Marle in Chrono Trigger (although at least her late mother, Queen Aliza, was mentioned at one point). And it's not limited to video games. In a recent post, I talked about Ozma's father Pastoria, who isn't given a consort anywhere in the Famous Forty. And what about Princess Jasmine in Disney's Aladdin? I have to wonder why this situation is so common in fiction.

bethje and I watched the newest episodes of Bullshit! and Real Time with Bill Maher last night. Penn and Teller addressed orgasms, in one of those episodes that's amusing enough, but doesn't really offer any significant arguments on anything. Sure, they exposed some people who make ridiculous profits by claiming they can provide the means for better orgasms, but I think the number of people who actually patronize these services is much lower than those who believe in reflexology or New Age healing. Overall, I think they just did this episode because they like to do sex-related shows every once in a while, and I guess I can't blame them for that.

The Real Time episode wasn't done in the regular format, but simply consisted of Maher interviewing Cameron Diaz, Oliver Stone, and Billy Bob Thornton one-on-one. These interviews are never as enjoyable as his normal discussions with guests, as they consist of much more ass-kissing, and address far fewer actual issues. He basically just fawned all over Ms. Diaz, but there was a little more substance to the interviews with the people he DIDN'T want to sleep with. Billy Bob did make a brief mention of the disastrous interview with Jian Ghomeshi (whom he simply referred to as "some DJ in Canada"), and tried to claim that he was speaking his mind, or something absurd like that. No, Billy Bob, that was incoherent rambling. He mentioned Patrick Henry, but he was famous for saying, "Give me liberty or give me death," not "I used to read Famous Monsters of Filmland." Unless that was one of his lesser-known quotations. Anyway, Beth said that the Boxmasters song they played at the end of the show reminded her of Thornhill-era Moxy Früvous, so that's kind of amusing.
Collapse