Happy Independence Day to my fellow residents of the United States! In honor of today, I'm going to cover a nationalistic sort of mythology, that of the national personification. The most famous one for the States is, of course, Uncle Sam, the bearded guy in star-spangled clothes who points rudely at you until you agree to go die in Iraq.

The common origin story for Uncle Sam is that he's based on Samuel Wilson, a meat inspector during the War of 1812. He used the initials "U.S." on the meat barrels, and one of the troops who received the meat joked that it stood for Wilson's own name, hence "Uncle Sam." By the end of the Civil War, he had become the most prominent personification of the nation. His popular image was, not surprisingly, largely influenced by Thomas Nast, the same guy who brought us our modern depictions of Santa Claus and Jack Frost, not to mention the animal symbols of our two main political parties. But Sam has not been the only human symbol of the States. There was also Columbia, a female figure who dates back to the beginnings of the country, and can still be seen in the logo for Columbia Pictures. Another was Brother Jonathan, whose height of popularity occurred before the Uncle Sam character was created, but who stuck around in some form until the Civil War. 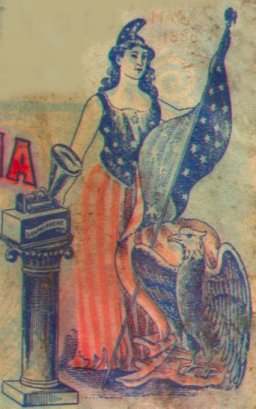 Many other countries have their own personifications. England has John Bull, who was used for the same purpose, but still looks less like he wants you to join the military than that he wants you to have some tea and crumpets with him. A popular French personification is a woman who originated during the French Revolution, often dressed in tricolor and Phrygian cap as in XTC's "Then She Appeared." Interestingly enough, she shares the name of Andy Partridge's then wife, Marianne. Apparently Marianne is one of the trampier national symbols, as she is occasionally depicted exposing one or both breasts.

In a link to classical mythology, many of the female personifications are actually versions of Athena, as can be seen in this picture depicting the Triple Entente. From left to right, these patriotic ladies are Marianne, Mother Russia, and Britannia.

If you're at all interested in this topic, I'd recommend this Wikipedia page as a good starting point. Johnny Canuck, Italia Turrita, the Irish Kathleen Ni Houlihan, the Indian Bharat Mata, and the Icelandic Lady of the Mountain are all there.

First, a meme from

Reply to this meme by yelling "Words!" [or just saying you want to participate -ed], and I will give you five words that remind me of you. Then post them in your journal, and explain what they mean to you.

It's been one of my most significant interests for years. I guess I have a special fondness for the myths involving weird monsters.

Oz has been my first literary love for years now, and I've done a fair amount of my own writing pertaining to L. Frank Baum's fairyland.

Not sure why anything thoughtful would be associated with me, but I think that's definitely the best kind of essay.

I'm not always (and perhaps not even usually) a logical person, but I think I ASPIRE to be. Not necessarily to Vulcan levels or anything, but I appreciate the ability to reason.

Well, it hath charms to soothe the savage breast, doth it not?

bethje and I watched The Sixth Sense last night. I don't know how much it was ruined for me by already knowing the twist ending, but I can usually enjoy movies (and books) even when I do know what's going to happen. It's the journey that's important. Here, however, the journey was incredibly slow-paced (although nowhere near as bad as The Village, from what Beth tells me), and didn't seem to consist of much other than hints that Bruce Willis' character is dead. And at the end, they pretty much hit you over the head with it, as if M. Night were thinking, "Even the dumbest viewer will understand the twist in THIS movie!" I'm not sure why it was a big hit back in its day.
Collapse