So, I've now seen the film version of Harry Potter and the Half-Blood Prince. I honestly hadn't been thinking much about Harry Potter recently, except sometimes in the context of comparing aspects of it to other fantasy universes. I guess part of the problem is that so much of the promotion for the books involved mysteries about what would happen in the next book that, once the last book came out, there wasn't really that much more to think about. So when I started seeing advertisements for the new movie, it had me thinking, "Oh, that's right! They still haven't finished making those movies!" Anyway, I watched it tonight with

bethje and Uncle John, and here are some of my thoughts on it:

And, well, that's probably about all for Harry Potter until the next movie comes out.

Genesis 10 lists the descendants of Noah's three sons. For the most part, it appears that Japheth's descendants settled Europe, Ham's descendants lived in Africa, and Shem's descendants were...well, the Semites, staying in the Middle East. These rules don't always apply, however, and some suspect that this was for political reasons. For instance, the fact that the accursed Canaan was a son of Ham rather than Shem might have been an excuse for the Jews taking over the Canaanites' land. After all, they were more closely related to the enemy Egyptians than to Shem and Abraham, right? We aren't told much about most of these descendants, with the exception being a certain grandson of Ham known as Nimrod, described as "a mighty hunter before the LORD," and the founder of the cities of Babel, Erech, Accad, and Calneh, and possibly several Assyrian cities as well (the Hebrew text isn't entirely clear). In other words, he was the founder of the great empires of the Middle East that would later conquer Israel and Judah.

As with other Biblical characters who receive an enigmatic sentence or two in addition to their names, a lot of legends about Nimrod have sprung up over the centuries. This Jewish Encyclopedia article describes many of them. His success in hunting is ascribed to his wearing the coats of skin that God made for Adam and Eve, and he is said to have turned away from the worship of Yahweh after his success at conquering and ruling. He's been identified with several other mythical and historical figures, including Marduk, Gilgamesh, Sargon, and Orion. The legendary Babylonian queen Semiramis (to whom Jack Chick attributes goddess worship in general, including the Catholic reverence for Mary) is sometimes said to be Nimrod's mother or consort, if not both, the Oedipal connotations being the source for the Pixies song "Nimrod's Son." Some modern sources even attribute the Christmas tree to Nimrod, but this strikes me as rather unlikely. The most common apocryphal story about Nimrod, however, seems to be that he was the architect of the Tower of Babel. 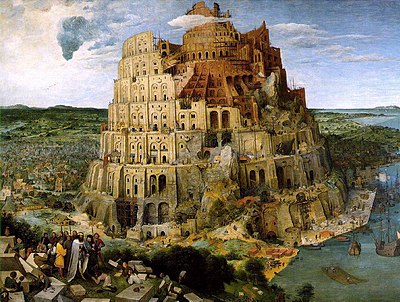 The story of the Tower of Babel is an interesting one, as it's along much the same lines as the account of the Garden of Eden, in that God is actually afraid that humans could unseat Him. He was apparently scared that the tower could actually reach Heaven, so He forced everyone to speak different languages. Why He didn't think they could reach Heaven simply by climbing mountains isn't clear, nor is there any indication that God made Wilbur and Orville Wright speak different languages when they invented the airplane. Maybe He wised up and moved Heaven somewhere other than less than a mile above Mesopotamia, or wherever it was before.

Scholars suspect that the origin for the tower story is a certain ziggurat that once stood in Babylon. Most ziggurats weren't that big, but this particular one, known as the Etemenanki was huge, ancient, and unfinished. It was eventually destroyed by the Assyrians, rebuilt by Nebuchadnezzar, and finally razed for good when Alexander the Great learned that there had been no progress on an intended second renovation. The writers of the Bible were probably also inspired by how many different languages were spoken in cosmopolitan Babylon, and there's also the matter of folk etymology. Such etymology often amounts to little more than a pun, in this case one that works just as well in English as in Hebrew, with the name "Babel" or "Babylon" supposedly coming from the word "babble."

Getting back to Nimrod, some accounts say that he went on to torment Abraham, throwing him into a fiery furnace (a technique that must have been passed on through the generations to his descendant Nebuchadnezzar) and such. He was finally killed by Abraham's grandson, the fellow hunter Esau. Or maybe it was Shem who killed him. As per usual, the stories vary. It's not entirely clear how his name came to be used as an epithet directed at stupid people. A popular theory is that it comes from Bugs Bunny's insults to the hunter Elmer Fudd, but this site says that it was used in that context before Bugs and Elmer existed. Perhaps more likely is that the term initially referred to the excessive pride associated with the legendary emperor, and eventually came to be just a generic insult. And, as

bethje pointed out when I told her the subject of my entry, Nimrod is also a font, invented in 1980 for use in newspapers.
Collapse