Since I've already said a bit about the Scarecrow and the Tin Woodman, now it's time to turn to Dorothy's third companion on her first journey, the Cowardly Lion. He's an equal partner in The Wonderful Wizard of Oz, but the popular stage play reduced him to a pantomime role, and he didn't show up in the second Oz book at all. Fortunately, L. Frank Baum listened to his readers' requests to bring the Lion back, and he had a significant role in Ozma and later books. He's more often paired with the Hungry Tiger than with his two earlier companions, though.

The extent of the Lion's cowardice seems to differ a bit from one story to another. Baum usually presented him as afraid of just about everything, but never letting that stop him from acting bravely when necessary. Ruth Plumly Thompson kept that characterization, but also made him more prone to panicking and fainting on occasion. One of my favorite portrayals of the Lion is in the McGraws' Merry Go Round, which gives him some sarcastic wit in addition to his other character traits. I think that, of Dorothy's three Ozian companions, the Lion is the one most misrepresented in the MGM movie. They keep the general idea of his being a coward who steps up when necessary, but he's played in a much more exaggerated and undignified fashion than the Lion of the books. That's not to say that I don't find Bert Lahr's performance amusing, but I think it's led to some misunderstandings about the big cat of the original books. 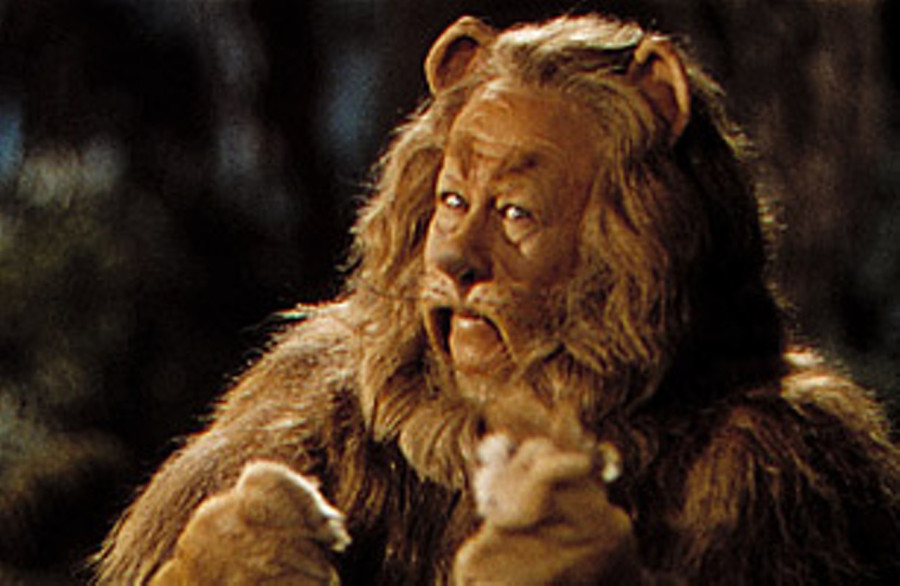 The Cowardly Lion's early history is never really explored that fully, but Dorothy finds him in a forest in the Munchkin Country, and he becomes ruler of another forest in the Quadling Country when he kills a giant spider that had been terrorizing and devouring the animals there. From Ozma on, however, we usually see the Lion in the Emerald City, serving as Ozma's bodyguard and chariot-puller along with his friend, the Hungry Tiger. Onyx Madden's Mysterious Chronicles, Fred Otto's Lost Emeralds, and Edward Einhorn's "Ozma Sees Herself" all give somewhat different accounts of how the Queen met the two famous felines.

I'd been meaning to say something about The 40-Year-Old Virgin, which I'd watched last week, but I didn't get around to it until now. The movie wasn't terrible, but like

bethje mentioned, I didn't care for Steve Carell's character selling his toys as a metaphor for growing up. Sure, if you play with toys instead of working, that's one thing, but this character did his job, even getting a few promotions during the course of the film. So why can't he indulge his youthful side while at home? I have to say I'm a fan of C.S. Lewis' take on 1 Corinthians 13:11: "When I became a man I put away childish things, including the fear of childishness and the desire to be very grown up." I know a lot of adults who play with toys and video games, and they're hardly all irresponsible. I was also reminded of this by a recent episode of Real Time, in which Bill Maher said something about American society being immature because we consider Harry Potter to be literature, and Batman movies to be...well, I forget his wording, but the gist was that we think they're deeply philosophical. But really, why ISN'T Harry Potter literature? No, they're not the greatest books in existence, but that's largely subjective anyway. Just because the main characters are kids and they're written so kids can understand them doesn't mean only kids can read them. Besides, Danielle Steele novels and Farrelly Brothers movies are allegedly made for adults, but are they really more sophisticated than J.K. Rowling or DC Comics? Hey, the previous episode of Real Time had Maher chatting with Ron Howard about Angels and Demons, and telling Cameron Diaz that he liked her in The Mask. Not to mention that, as my wife mentioned, he's a guy in his fifties who still identifies himself as a pothead. But, you know, he's too mature to enjoy superhero movies. I guess that, just like everyone, Maher has his own blind and hypocritical spots. And getting back to the movie industry, if they're selling the idea that adults being interested in toys and games is incompatible with growing up and having serious relationships, then why do they keep cranking out films based on stuff like the Transformers and G.I. Joe?

Speaking of stuff made for children that adults have also enjoyed, we also watched Monsters, Inc. for the first time. I think it was still relatively recent when we put it on the Netflix queue, but there are a LOT of items on there. Anyway, I enjoyed it. I thought it did a good job of creating the monster world in an hour-and-a-half movie, complete with complex but cute designs and an explanation as to WHY monsters would hang out in closets and scare children.

All right, I guess that's all for now.
Collapse