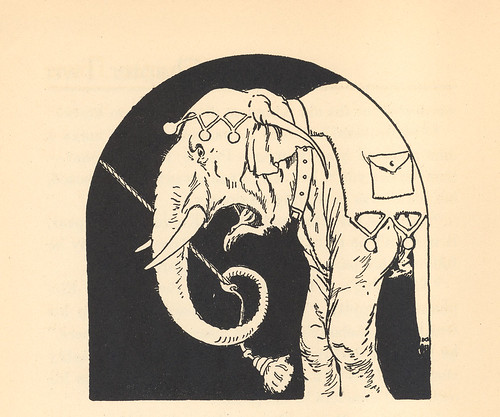 Really, I don't think it would be possible for anyone to forget the most famous pachyderm in Oz, the Elegant Elephant Kabumpo. He's quite possibly Ruth Plumly Thompson's most successful addition to the roster of Oz characters, and one of my favorites as well. He's a very well-defined character, being rather pompous, elitist, convinced of his own rightness, and quick to anger. At the same time, however, he's loyal to his friends, quick with a joke, and so wise that King Pompus, the ruler of his home kingdom of Pumperdink, trusts him more than any of his other advisors. He's been granted the title of Prince and Chancellor of the Realm, and is considered part of the Pumperdinkian royal family.

Kabumpo's origins aren't totally clear. We know that he's the only elephant in Pumperdink or any nearby kingdom (although not the only one in Oz; a few others are mentioned as early on as Wizard), and his first appearance (in Kabumpo in Oz; he's apparently such a prominent character that he received a book title right away) identifies him as a gift to Pompus from from a mysterious stranger at the christening of the King's son, Prince Pompadore. Later books, however, say that Kabumpo was a gift from a celebrated Blue Emperor. This discrepancy provides the main plot idea for Henry Blossom's Blue Emperor, in which the long-forgotten Emperor turns out to be both Pompus' brother and Ozma's grandfather.

The Elegant Elephant's starring roles often involve his being totally convinced of something, only to turn out to be wrong. He thinks that Ozma is the proper princess for Pompadore to marry (Kabumpo), that a dummy with the unfortunate name of Humpy is King Pastoria under enchantment (Lost King), that the Red Jinn lives in the Quadling Country (Purple Prince), and that Toby Bridlecull kidnapped Ozma (Forbidden Fountain). Nonetheless, his heart is in the right place, and he's been willing to put himself into undignified situations when he deems it necessary.

Since the pachyderm is such a popular character, he's appeared in several apocryphal Oz books. I've already mentioned Blue Emperor, and Magic Dishpan introduces his sister Kabina. This elephant isn't really characterized that well, and I've seen it suggested that the author originally just wanted to use Kabumpo himself, but changed it to be on the safe side of copyright. Still, the idea that Kabumpo has a sister with whom he still keeps in touch is interesting. I've considered the idea of King Pompus having his own sister (he already has one canonical and one non-canonical brother, so why not?), and maybe Kabina was a gift from the Blue Emperor to this sister.

By the way, I dressed up as Kabumpo at a few Oz Conventions, as can be seen in this pictorial evidence: 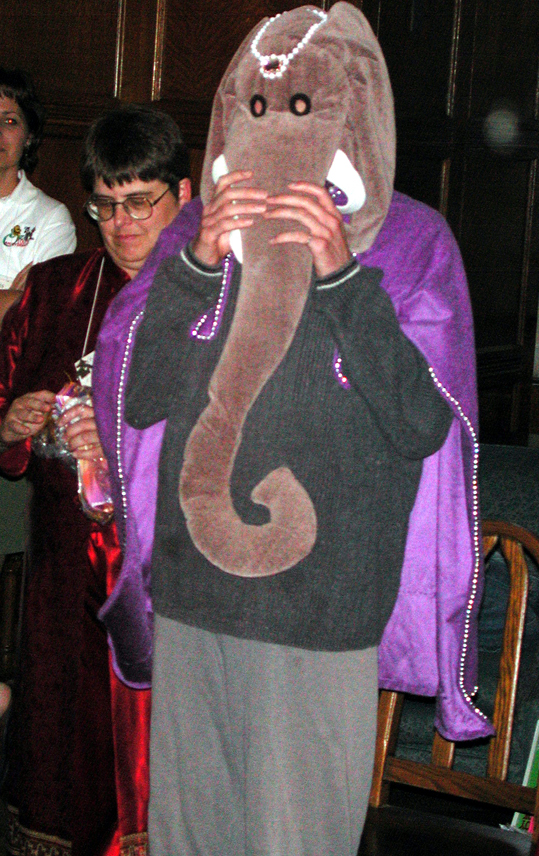 I've read a few rather critical articles on Harry Potter recently. This one (for which I got the link from

sailorptah) discusses how much of the story is steeped in somewhat misunderstood Calvinist doctrine. I think the author has some good points, especially on how, despite Rowling's constant insistence that Harry's choices are the most important thing, much of what happens really is predestined. I kind of get the impression that Rowling was trying to come up with a plot NOT centered around destiny, but ended up falling into that sort of thinking anyway. One thing I did think was interesting was how a lot of fans were speculating that Harry would turn out to be the descendant of Godric Gryffindor, and Rowling never actually told us one way or the other, presumably because the Gryffindors weren't obsessed with bloodlines in the way that Slytherins are (and Chamber of Secrets did make a big deal out of Voldemort being Salazar Slytherin's only remaining descendant). While Rowling de-emphasizes the importance of bloodlines, however, she clearly does play favorites with her Houses. As some of the comments on the article mention, this isn't as pronounced in the earlier books, which seem to focus on Gryffindor mostly just because it's the house of the protagonist. Some of the books have the Sorting Hat urging the houses to pull together. The way the series ends, however, we're pretty much told that, with a few minor exceptions, Gryffindors are good, Slytherins are bad, and members of the other two houses can only ever aspire to be supporting characters. (I'll bet Ravenclaw is viewed with the same kind of disdain as the Honors College I was in during my undergraduate years.) Granted, it's not really always that simple, but there's a clear Gryffindor bias at work. Rowling has even said that she would have wanted to be in Gryffindor, even though what I've seen of her doesn't suggest that bravery is her primary trait. I was also somewhat surprised by how, in the last book, it's Voldemort who wants to abolish the house system, and he's totally unsuccessful, with the four houses still being in place in the afterword. I suppose that, to wizards who aren't evil masterminds, cliques are just that awesome.

I found this other article through a link from John Bell (although his direct link was actually to this other Potter-related article by the same author)), and its major idea is that Rowling's wizards are, despite the etymology of the word "wizard," actually somewhat anti-intellectual. As Ms. Abrahams writes, "Magic culture in Great Britain appears to be entirely comprised of team sports, tabloid journalism, and government bureaucracy." There are a few mistakes in the article, like how Abrahams claims that there are no math classes at Hogwarts, when the books mention Arithmancy (although it's never significant enough for us to actually see a class). I have to wonder if part of this is because we see most of the wizarding world through the eyes of kids with jock tendencies (well, except for Hermione, who's a nerd who hangs out with jocks). There might well be more intellectual parts of wizarding society that we generally don't see. But I do think Abrahams has a point about how clueless the wizards are about Muggles. I mean, it's funny, and that's worth a lot to readers, but it kind of doesn't make sense. For the most part, wizards seem to live in hidden parts of the Muggle world, which means that, unless they apparate everywhere, they pretty much have to walk through Muggle neighborhoods to get to their places of magical work and leisure. Are they so unobservant that they don't even notice what anyone is wearing? And do the wizards have any, say, carpenters or plumbers, or do they rely on magical creatures to perform those menial jobs for them?
Collapse