First of all, happy birthday to

bethje and I attended the thirteenth Monster-Mania Convention in Cherry Hill today. This time, we didn't visit the dealer room at all, but simply stayed in the ballroom where the panels were held. Here's a brief rundown of what we saw:

It was fun, but I couldn't help feeling restless about staying in the same place for so long. Yet I have no problem sitting at my computer for hours on end, so what's with that?

If you're interested in seeing pictures of this event, you can do so here.

On the face of it, the Exodus story is rather difficult to accept. And I'm not even talking about the plagues yet, but simply the idea that over one million people take forty years to walk about 250 miles (apparently leaving no archaeological trace, at that). With that many people, you'd think Moses would have already reached the Jordan by the time the last few followers were getting out of Egypt. Okay, that's a bit of an exaggeration, but the Exodus tale also has to be, right? The number forty, after all, sometimes merely means "many." Still, it's amusing to think that monotheism owes its origins to Moses having a really bad sense of direction. {g}

Moses, as I'm sure we all know, was left in a basket among the reeds in order for his mother Jochebed (who, according to the Masoretic text, was also his great-aunt; the prophet's family tree was rather twisty) to avoid having to hand him over to the Pharaoh's men to be killed. This was a common mythological motif for children who would grow up to be important, most significantly paralleled in the legend of Sargon, but told about many other figures as well. Whether Moses was an actual historical figure is a matter of some debate, and I don't think there's any clear evidence for his existence. On the other hand, the fact that stories told of other famous leaders of the time and place (not just Sargon with the birth story, but also Hammurabi in that they both climbed a mountain to receive the law) doesn't necessarily mean he WASN'T real. Regardless of the truth in the matter, the way the Bible tells the story is that Moses was raised by the Egyptian royal family, but fled Egypt for Midian after killing an Egyptian overseer who was beating a Hebrew slave. He later returned to play a bunch of nasty tricks on the Pharaoh and lead his people out of Egypt.

So, who was this pharaoh? Well, there are actually two involved, since the one who raised Moses died during the prophet's exile. It's been common opinion for some time that the Pharaoh of the Exodus was Rameses II, who was known for his massive building projects. Others associate the plagues with the effects of the Minoan eruption of Thera, which would have put the Exodus well before the reign of Rameses. Josephus drew parallels between the Exodus and the expulsion of the Hyskos, and others note the similarity between the words "Hebrew" and "Hibaru," a term for a nomadic people who served as warriors and/or laborers in Egypt. I think it's unlikely that we'll ever get a real answer, and the time frames given in the Bible are of no real help, not only because a lot of them were likely estimates (both Saul and David were said to have ruled for "forty years," which once again probably just meant "a long time, but we're not sure exactly how long"), but because some of them contradict each other. Solomon is said in 1 Kings to have built the temple 480 years after the Exodus, but adding up the intervening years in earlier books gives us a considerably higher figure. The sojourn in Egypt is said in a few places to have lasted 430 years, yet Moses is recorded as being only three generations removed from Levi, who came to live in Egypt with his father Jacob during the events of Genesis. And any figuring that regards the numbers in the Bible as exact would mean (at least according to archaeological evidence) that Jericho had been long abandoned by the time Joshua would have reached it, hence no need for blowing down the wall with trumpets. So what we're left with is a bunch of events that can't be dated with any certainty. Even if the Exodus WAS historically true, it might well have been conflated with other stories from around the same time period.

I also wouldn't put it past later writers to have put their new ideas in the mouth of Moses to give them an extra level of authority. In fact, attributing books to important historical figures has been a common practice for centuries. Just look at how many rules in the Torah mention kings and cities, even though they supposedly date from a period when the Israelites were still a nomadic tribe. Mind you, if you're going to accept what the early Christian writers said, a lot of prophets were talking about Jesus many centuries before he was born. I realize it's pretty much all the same to God if He exists outside of time (maybe God also told Moses not to put tin foil in the microwave, but the rule became lost over the years), but I don't think the Israelites would have been so eager to accept prophets who kept talking about things to come in the distant future. They would have wanted prophecies they could USE.

According to the Biblical account, Moses died before reaching the Promised Land, and it was up to his successor Joshua to lead the Israelites into their new home. Unfortunately, it turned out that other people had already set up their own civilizations in this Promised Land, so Joshua and his troops brutally slaughtered them and destroyed their possessions, leaving only the virgin women alive to rape marry. One of the most intriguing figures killed by the Israelites (this one actually still within Moses' lifetime) was King Og of Bashan, who, according to Deuteronomy 3, slept in bed that measured "nine cubits in length and four cubits in width," or probably about thirteen by six feet. This is usually taken as an indication that he was a giant, but maybe he just liked a lot of room when he slept. They don't call 'em "king-sized beds" for nothing, after all. The legends that developed about Og, however, made him not only a giant but one of the original Nephilim from Genesis 6, who survived the Flood by stowing away on the Ark.

Next week, we'll skip ahead a bit, and take a look at a tall tale hero who somehow sneaked into the otherwise fairly realistic Book of Judges. Until then, remember that there's none so great as Joshuay at the Battle of Jericho, even if the city WAS already vacant by the time he got there. 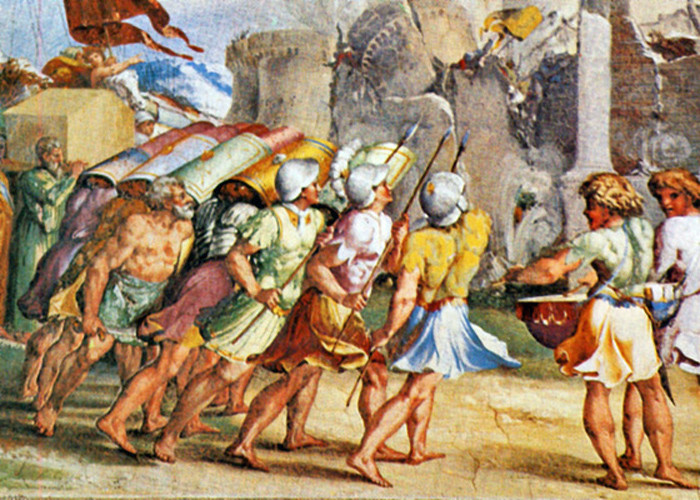