Moving on in the Bible, we come to the Book of Judges, which describes the actions of the leaders of the Israelites after they settled the Land of Canaan, but before they had a monarchy. Interestingly, one of these judges, Deborah, was female, and it's in her time that another woman, Jael, assassinates the Canaanite war leader Sisera. (Incidentally, the captain of the Israelite army is named Barak.) In a largely male-dominated book like the Bible, it's nice to see women in major roles. In the particular story I'm discussing this week, however, women (or at least FOREIGN women) are seen in their traditional Biblical role as temptresses. I refer to the story of Samson, the last of the judges to be mentioned in the book, although not the last recorded pre-monarchic leader of Israel (that would be Samuel).

It's been a little while since I actually read the book all the way through, but from what I remember, Judges is mostly a pretty realistic account. Sure, there are supernatural explanations, but not as many as in previous books. The story of Samson, however, is full of super-powered escapades. There's a reason why I'm covering him and Hercules in the same weekend, because there are some definite similarities between the two, incredible strength being the main one, but they also both killed lions, had a series of twelve major exploits (according to the Wikipedia article on the book, anyway), and were done in by a woman. Actually, perhaps Samson is more like a parody of Hercules. While Hercules certainly had his bad points (killing his family certainly isn't going to win him any favors), he was also willing to help pretty much anyone in distress, and able to think his way through situations in which his strength was useless. It's not uncommon for people to view Hercules as a buffoon, but that really wasn't how the Greeks wrote him. Samson, on the other hand, really IS pretty dumb, constantly getting into trouble and relying entirely on his brute strength to get out of it. 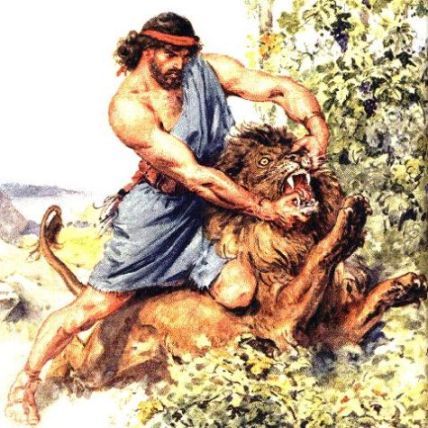 Like the births of many mythological figures, Samson's was foretold by an angel, who said that the child of Manoah of the tribe of Dan and his unnamed wife would be a Nazirite for life. The Nazirite Vow, as described in Numbers 6, is a form of consecration to God that involves avoiding haircuts, corpses, and wine. The hair is particularly significant in the Samson tale, being directly connected to his strength. Samson has an attraction to Philistine women (I guess shiksa appeal existed even back in those days), and marries two of them, both of whom turn out to be spies. If you want a hero who learns from his mistakes, I'd advise you to look elsewhere. His first wife is unnamed, but his second is the infamous Delilah, who makes several attempts to coax Samson into revealing the cause of his superhuman strength. After tricking her three times, the strong man tells her the truth, even though he should have been well aware by this point that it was a trap. Delilah cuts off Samson's hair, accepts bribe money from the Philistine leaders, and goes on to become an obnoxiously sappy radio personality. Samson, meanwhile, is enslaved by the Philistines, but when his hair grows back (for some reason, his captors didn't think to keep cutting it; maybe that bit of information was held up by bureaucracy), he becomes an Iron Age suicide bomber, and takes down the temple of Dagon in which a festival is being held, killing himself in the process. Dagon, by the way, was a Philistine god whom many think had the form of a merman, and whose name Lovecraft appropriated for one of his amoral alien deities. I might have to write a post on him in the near future, if I can find enough information.

Since Samson's superhuman feats seem rather out of place in the Book of Judges, and his actions portray him as a lone wolf rather than a leader like the other judges, it seems somewhat likely that his story was an earlier myth that somehow became linked to the time of the judges. I've seen it suggested that Samson was originally a solar deity, based on his name (which quite possibly means "of the sun") and the fact that his long hair could symbolize the rays of the Sun. But he could also simply be a folk hero, or a real person whose deeds became exaggerated over time.
Collapse