Top of the Charts
What's the most-played song in your music library?
Reply 818

According to iTunes, it's "Your Kisses Are Wasted on Me," by the Pipettes. Last.fm, which has data from before I got this computer, says that it's a tie between "The Cap'm" and "Withered Hope," both by They Might Be Giants. That doesn't include anything I listen to while not on the computer, though.

Okay, I think I'll go to bed now. I'll probably put up an Oz post when I wake up. Happy Labor Day! 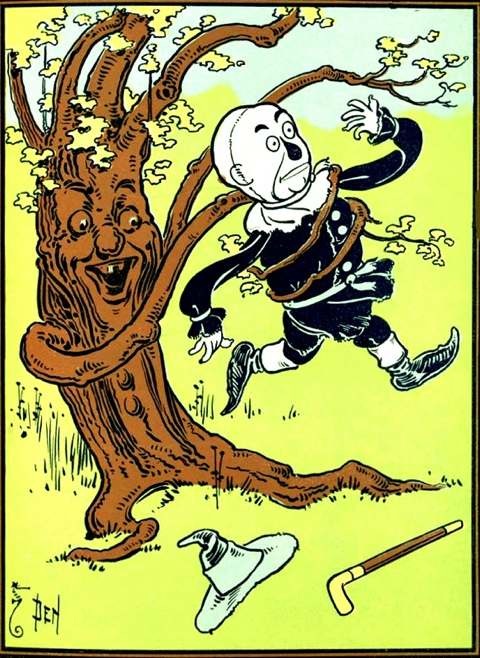 As anyone who's read The Wonderful Wizard of Oz knows, there are a few chapters that take place after the exposure of the Wizard that are often left out of adaptations, but include some of Baum's more interesting creations. These include the Fighting Trees, a group of trees that line the borders of a forest between the Emerald City and Glinda's palace, and try to keep intruders out of their forest by throwing them back with their branches. The Tin Woodman helps his companions to get past them by cutting off their limbs, and these trees don't bother anyone else journeying between the capital and the Good Sorceress' home, so perhaps a way was found to bypass them. While these Fighting Trees weren't in the MGM movie, they might have been the inspiration for the nasty apple trees animated by the Wicked Witch of the West (who are said by some to bear a certain resemblance to John Kerry). 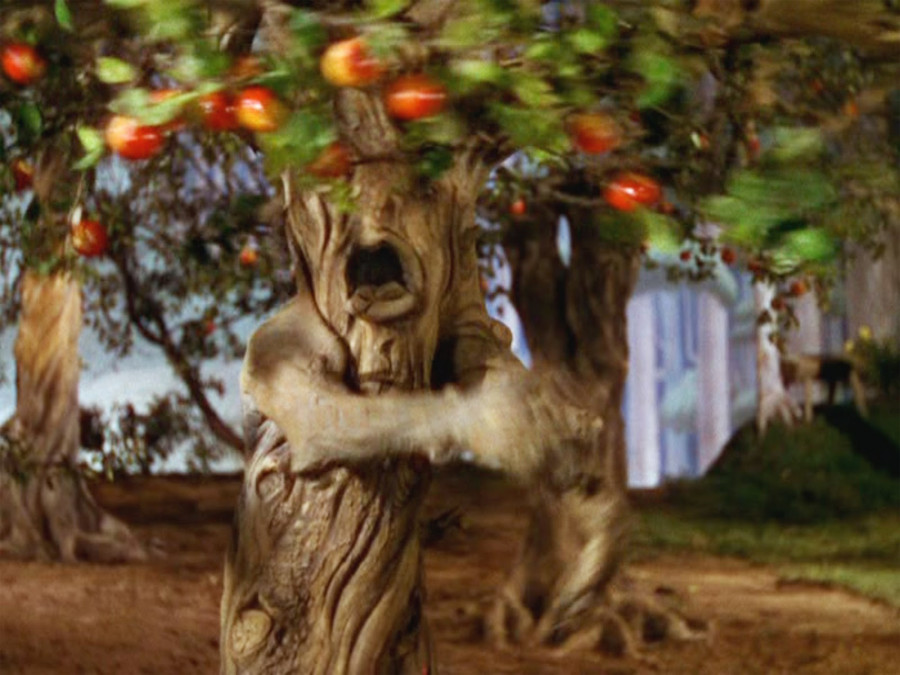 These are hardly the only sentient trees in the Oz series, however. In Kabumpo, Thompson takes the same basic idea a few steps further by introducing an entire forest of antagonistic trees that can walk and talk, known as Twigs. They're obsessed with pinching people, and their king is known for his hatred of gormishness. The book never actually tells us what this word means, but maybe it's the opposite of gormlessness? Actually, while on the subject of walking and talking trees, the Twigs' hatred of gormishness kind of reminds me of the dislike that Tolkien's Ents have for hastiness, but I don't think there's any actual connection there. Getting back to the Twigs, Ojo has Glinda's Book of Records mentioning a war between the Grigs and Twigs of South Mountain, which gives me the image of giant crickets fighting moving trees.

I believe the next sentient trees in the series are the laughing willows in Lost King. There's no indication that they can move around, but they do talk, mocking anyone who passes by. Lucky Bucky has more traditional weeping willows lining a river in Ev, but they also start laughing once they get the idea to send Davy Jones to Tickley Bender. Jack Pumpkinhead introduces a Christmas tree that runs around trying to collect things it can use as ornaments. In Scalawagons, there's an entire forest in the Gillikin Country that, during a period of drought, pulls up roots and starts wandering Oz in search of a better climate. The trees get caught up in the Bell-Snickle's half-hearted attempt to conquer the Emerald City, but after that's thwarted, Ozma gives them jobs as transportation for a group of diminutive forest rangers to use in fighting forest fires. You'd think that trees would be about the last sort of vehicle a firefighter would want, but when we discussed Scalawagons on the Regalia mailing list, Ruth Berman suggested that they would probably just be used as scouting posts.

There's somewhat of a variation on the same general theme in Hidden Valley, in which the Tin Woodman inadvertently cuts branches from trees that apparently can't move or talk, but can tell what's going on. When he builds a raft from this wood, it acts quite ornery, and the heroes have to use reverse psychology to get it to the other side of a river. There's a similar idea in Roger Baum's Dorothy, in which wood from friendly Talk Trees is used to make a talking boat named Tugg.

Although Neill, in his tendency to make pretty much everything in Oz sentient, might have thought that ALL trees in Oz can walk and talk if necessary, I'm inclined to think such trees are a minority even in fairyland. One idea I'd sort of like to work into an Oz story is that of a philosophical tree explaining the two conflicting explanations of his kind, one being that some trees are animated by specific magic, and the other that ALL trees were sentient before undergoing some sort of fall.
Collapse