In Greek mythology, Tantalus was a son of Zeus and Pluto. No, not the god Pluto, but a nymph of the same name. He was a king somewhere in Asia Minor (different sources identify his domain as Sipylos or Paphlagonia), and made his way into the gods' good graces. He ate at their table, but stole food from it to share with mortals, which the Olympians obviously didn't care for. I believe some sources say that was his main crime, but the more famous version of his biography has Tantalus going on to do something much more heinous. He kills and cooks his own son Pelops and serves him to the gods. The Fate Clotho was able to revive Pelops, but since Demeter had eaten his shoulder, he had to make do with an ivory one made by Hephaestus.

When he died, Tantalus was sent to Tartarus, the part of the Underworld reserved for the truly awful. He was kept chin-deep in water with fruit trees above his head, but when he tried to reach for either the fruit or the water, it would recede from him. As bad as that would be, I have to suspect that he would have just stopped trying after a few years or so. Perhaps being aware of this, some mythologists also said that there was a boulder hanging above the son-slaughtering king's head. Tantalus, by the way, appears in the second Percy Jackson book, in which his inability to touch food is treated in a rather comic manner. 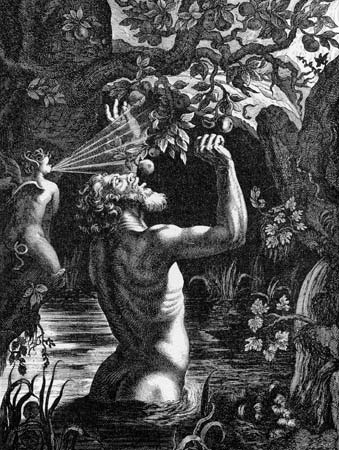