When the Bible goes on to describe the beginnings of the Jewish monarchy, it portrays Saul and David fairly realistically, telling of their flaws as well as their successes. David, for instance, is a guy who served an enemy state as a mercenary, and after becoming king thought it gave him the power to have sex with any pretty girl he saw. There's little archaeological evidence for any of this, and even the Bible itself gives hints that some of the stories might not be entirely true. One of the most famous tales of David is that of his victory over Goliath, but Chronicles credits someone named Elhanan with this feat. Once we get to the reign of David's son Solomon, however, most of the semblances of realism are dropped. Sure, the account of Solomon's kingship might well be BASED on historical fact, but I think even an apologist would have a hard time believing it was correct in all details. Solomon is said to have ruled an empire stretching from the Egyptian border to the River Euphrates, which is historically unlikely. Also, he carried on a robust trade with many other nations, some of which can't be positively identified today. Tarshish is often considered to be the same as Tartessos, a now lost city in modern-day Spain, but the location (and, indeed, even the existence) of Ophir is much less clear. Writers like H. Rider Haggard and Edgar Rice Burroughs would go on to place it in southern Africa. Also of somewhat disputed location is Sheba, although the most common idea seems to be that it was in modern-day Yemen. The unnamed Queen of Sheba is said to have had an affair with Solomon after he impressed her by answering a bunch of questions (hey, she was hardly the only woman to have a thing for nerdy Jewish guys [1]), and Ethiopian sources credit this union for producing their own royal family. Goods that Solomon is said to have acquired through trade include gold, ivory, wood (cedar from Lebanon was used to build the Temple of Yahweh, but there are mentions of Israel receiving wood from other places as well), chariots, horses, apes, and peacocks. 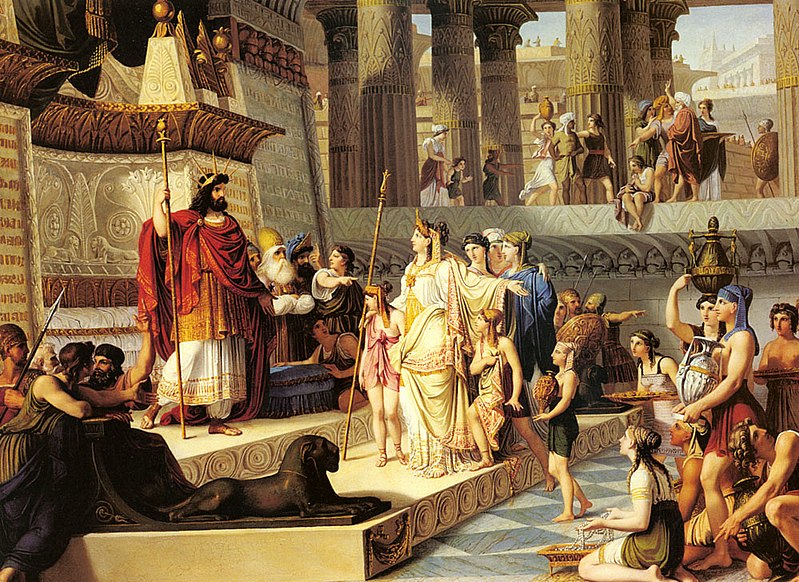 It wasn't until some centuries later that Solomon was said to have been a sorcerer, but this tradition appears in both Jewish and Islamic sources, and has made its way into a good deal of fiction, mostly prominently the Arabian Nights. He's said to have had control over demons (or jinn, in Islamic terminology) through the use of a ring emblazoned with the Star of David. One story told of the ring has the head demon Asmodeus tricking the king into giving it up, and the demon throwing it into the water, only to have it show up again inside a fish that Solomon catches. This basic idea has shown up in various places, but I believe its earliest known occurrence was in the Greek myth of Polycrates of Samos. Other powers ascribed to Solomon include the ability to communicate with and command all living things, and control of the wind. His possessions included a flying carpet, a mechanized throne that followed him around, and a grimoire known as the Key of Solomon. In building the temple, he is said to have received assistance from a shamir, a kind of worm that could cut through stone.

Despite King Solomon's wisdom and initial favor by Yahweh, he isn't portrayed entirely positively even in the Bible. He's said to have had 600 wives and 400 concubines, including some foreign women, and these women made him go a-whoring after other gods. Sure, blame the women! It's not like the Bible doesn't do that about twenty million other times. It's not too hard to imagine this as a case of Solomon simply offering religious freedom, regardless of his own beliefs. But the authors of the Books of Kings were in favor of theocracy, so their monarchs of choice were those who forbade the practice of religions other than Judaism, like Josiah.

bethje, for one, whom I didn't mention at first because I didn't know if she'd want me to, but she says she wants it known.
Collapse