The Land of Ev, introduced in Ozma of Oz, was the first country that Baum specifically created as a neighbor to Oz. He later decided that lands from other non-Oz fantasies (Ix, Noland, Merryland, Mo, etc.) were also located near Oz, but they weren't originally created that way. Ev is right across the desert from Oz, but its exact location isn't entirely clear. Ozma places the land to the east of Oz, across the desert from the Munchkin Country. Most later books, however, have it across from the Winkie Country instead. The map in the Tik-Tok endpapers puts it to the northwest of Oz, but makes the Nome Kingdom a separate country, when other references suggest that it's beneath Ev. Since the land above the Nomes' underground domain is usually described as being a wasteland of mountains and desert, perhaps the rulers of Ev don't really care whether it's counted as part of their dominions. Another oddity of the map is that it places the royal family's castle to the northeast of the Nome Kingdom, when Ozma has Princess Langwidere saying that the Nome King's palace is "underneath the great mountain which is at the north end of this kingdom." And the Thompson books casually refer to Rash and Menankypoo and being in Ev, despite the fact that they have their own governments and no indication of being subject to the rulers of Ev.

So who ARE the rulers of Ev? Well, when Dorothy first arrives there in Ozma, she learns that the previous king was named Evoldo. I'm not entirely sure how to pronounce that name, but chances are it's at least supposed to be reminiscent of "evil-do," because, well, he did evil. He was basically your archetypal mad king, beating his servants to death, and eventually selling his wife and ten children to the Nome King in exchange for a long life, which he then destroyed by committing suicide.

While the royal family was imprisoned in the Nome King's palace, Evoldo's niece Langwidere served as regent. She was a rather odd individual, possessing a total of thirty heads, and changing them regularly. In the movie Return to Oz, Langwidere was combined with Mombi, becoming an effective villain. In the book, however, Langwidere isn't really evil so much as incredibly vain and self-centered, and subject to mood changes depending on which head she's wearing. She locks Dorothy up in a tower when the Kansas girl refuses to trade heads with her, but releases her without any fuss on the next day, at the insistence of Ozma. 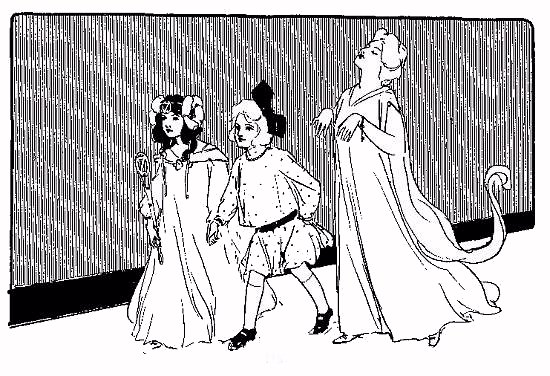 When Ozma and her retinue arrive at the Nome Kingdom, they discover that the King has turned the Evian royals into ornaments. They manage to save them, with some considerable help from the hen Billina, and the eldest boy is crowned King Evardo XV. While I realize that there can be gaps between numbered rulers (there was, for instance, over a century between Henry III and Henry IV ruling England), it does seem a little bit odd that his father wasn't Evardo XIV. I had the idea that Evoldo might have been the brother of Evardo XIV, who died young, but there's no canonical support for that. Anyway, Evardo XV is fifteen years old when he's crowned, but Dorothy makes a reference in the much later Wishing Horse to Ev being ruled by "Evardo, a boy king." Is this an indication that aging in Ev is much slower than it is in the Outside World (which would have support in the statements in Pirates that Captain Salt and King Ato, both fairyland residents but not Ozites, have been alive for centuries), or is there another Evardo ruling at this point? I tend to think Thompson was trying to convey the former, but the latter is certainly a possibility based on the dialogue. In Lin Carter's apocryphal Tired Tailor, several characters attend the birthday party of the same Evardo who was rescued in Ozma, and this obviously takes place after Wishing Horse because Chalk is said to accompany King Skamperoo to the party. For that matter, it's also after Hidden Valley, what with the Leopard with Changing Spots being a resident in the Emerald City. This book also gives the previously nameless queen mother the name Evraline.

Tomorrow, we'll take a look at the geography, flora, fauna, and peoples of Ev. Until then, beware the Wheelers!
Collapse