As I mentioned yesterday, the geography of Ev is a little confusing. While Ozma of Oz places the entrance to the Nome Kingdom in the northern part of Ev, the map in the Tik-Tok of Oz endpapers puts Ev to the northeast of the Nomes' domain, and later books go by the map in placing new locations within Ev. In their map for the Oz Club, James E. Haff and Dick Martin accounted for this by making Ev bigger, and placing the Nomes' homeland more or less in the middle of it. Perhaps the northeastern part of Ev is the domain of the Red Jinn, whom Thompson refers to as a ruler in Ev without clearly defining his territory.

The part of Ev between the seashore and King Evardo's castle is mostly farmland and deciduous forest. It's around here that the famous lunchbox and dinner pail trees grow, with a fully prepared meal inside each container. While trees bearing unusual items were common in Mo, they actually hadn't yet appeared in an Oz book at the time of Ozma, although they would later on. I wonder if the lunch and dinner trees were planted by Wam, the wizard who was responsible for the Travelers' Trees in Oz. The area above the Nome Kingdom, known as Nome Man's Land, is a mountainous wasteland, while Jinnicky's domain is said to be largely tropical in climate, albeit apparently requiring heat in the winter. Silver Princess refers to it as having orange and lemon trees, as well as coconut palms, and the illustrations show plants bearing pitchers, bottles, teacups, and orreries (mechanical models of the solar system). Also in Jinnicky's domain is a field of pink feathers that violently tickle anyone who gets near them, presumably planted by Gludwig during his usurpation of the Jinn's throne. The Red Jinn owns fifty ruby mines as well, and I have to suspect that operating mines that close to the Nome Kingdom comes with its own risks.

Part of King Evardo's castle was demolished during Princess Langwidere's regency, and it's unknown whether it was built back again. Near the castle is the capital city of Evna, which is never really explored in any of the Oz books, but is known as the former home of the great inventors Smith and Tinker. These partners, whose known inventions included Tik-Tok, the Giant with the Hammer, and the Hundred-Year Alarm Clock, both disappeared from Ev during Evoldo's reign. Mr. Smith drowned in a painting of a river, while Mr. Tinker climbed a ladder to the Moon and decided to stay there. While Baum gives the two only last names, extra-canonical sources refer to them as Rejano Edison Smith and Ezra P. Tinker. And Wooglet makes a reference to Mr. Smith's grandson now running their old firm. 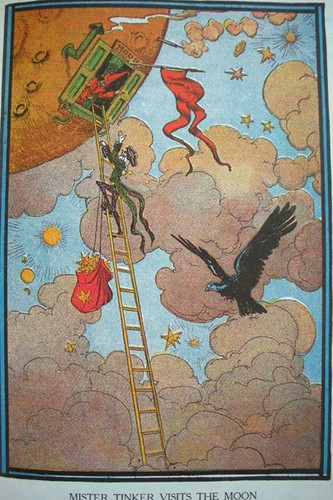 Other significant locations and inhabitants within Ev include:

( Collapse )
Incidentally, I believe Silver Princess is the only canonical Oz book to refer to the people of Ev as "Evians," but I don't think we see any other alternatives, so I regard this as the accurate term. I assume it's not pronounced like the brand of bottled water, though.

Everyone knows what an elf is, right? Well, you probably think you do, but in truth you could have a very different idea from someone else. As I mentioned here, the traditional elves of Scandinavian mythology, the Elves of Middle-Earth, and Santa's diminutive and industrious helpers are actually pretty different. Traditionally, elves were essentially regarded as demigods, human in form but more attractive than normal people, and with connections to nature. Really, they probably aren't too different from nature spirits from other traditions. As with other mythological elements, it's probably a case of similar stories originating in different parts of the world, then being combined when the cultures come into contact with each other, and later fantasists picking and choosing from both the older and newer myths. If you're going for mythological authenticity, it appears that J.K. Rowling's house-elves are really more like hobgoblins or kobolds than traditional Scandinavian elves, and Santa's staff has more in common with dwarves than elves. Then again, the Norse dwarves, or dvergar, are often pretty much interchangeable with dark elves. They mine and forge (jobs that trolls and gnomes are also sometimes given), while the light elves are associated more closely with fertility. Really, it seems that the old Norse records are too contradictory and incomplete to really paint a clear picture of the earliest concepts of elves or dwarves. What we know comes more from later folklore, which portrays elves as mischievous and nasty. To writers like Spencer and Shakespeare, the terms "elf" and "fairy" were basically synonymous, and they were thought of as tiny creatures with human shapes. 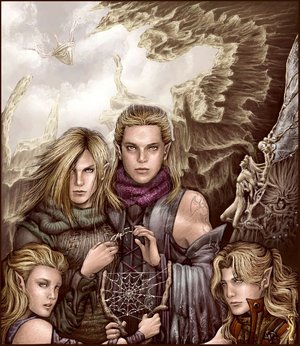 While the concept of elves as miniature people with magic powers still lives on today in such forms as the Keebler Elves and Rice Krispies' tiny mascots, much of their role in modern fantasy literature derives, not surprisingly, from Tolkien. His elves reflected, in some ways, those of the earliest known Scandinavian sources, being noble, beautiful, human-sized, functionally immortal, and in tune with nature. They aren't petty and vindictive like the elves of folklore, but instead basically have an Übermensch role in Middle-Earth. Despite Tolkien's obvious prejudice in favor of his Elves, they do have their flaws, like their long-standing enmity with the Dwarves (and it's Tolkien who popularized that plural, although he didn't invent it; I personally prefer it to "dwarfs"). Was Middle-Earth the first fantasy world to show elves and dwarves as traditional enemies? If it was, it might have been based on the references to dwarves as "dark elves," and it's carried over into other universes that include both races. It's not always the case, however. In Dragon Quest III, it's necessary to give yourself the form of a dwarf in able to conduct business with the elves, as the two peoples are friendly. In the Discworld series, it's the dwarfs and trolls who are traditional enemies, although both groups also hate elves, who are glamorous but malicious beings in Terry Pratchett's world. Their glamor allows them a lot of power in harming humans, but dwarfs and trolls can see right through it. 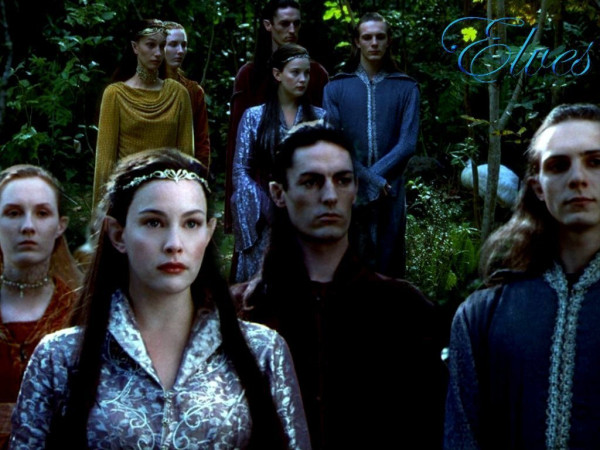 I think Tolkien was also the first to devise the idea that male and female dwarves look the same to non-dwarves, which implies that the women also have beards. Pratchett ran with this concept in the Discworld books, using it for both humor and social commentary. Other fantasy worlds have made female dwarves more traditionally feminine in appearance, without the beards. Come to think of it, Disney's Dopey doesn't have a beard, so is he actually a woman? {g}