Super Mario World was the first game to introduce Magikoopas, Koopas with magical powers of transformation and teleportation. Later games give at least some of them additional powers, but those two are typically retained. The Japanese name for Magikoopas is "Kamekku," based on "kame," the word for "turtle." This becomes a little confusing, as Super Mario World brings in a Magikoopa actually NAMED Kamek, and the translations sometimes make it unclear whether a specific enemy is THE Kamek, or just a generic Magikoopa. 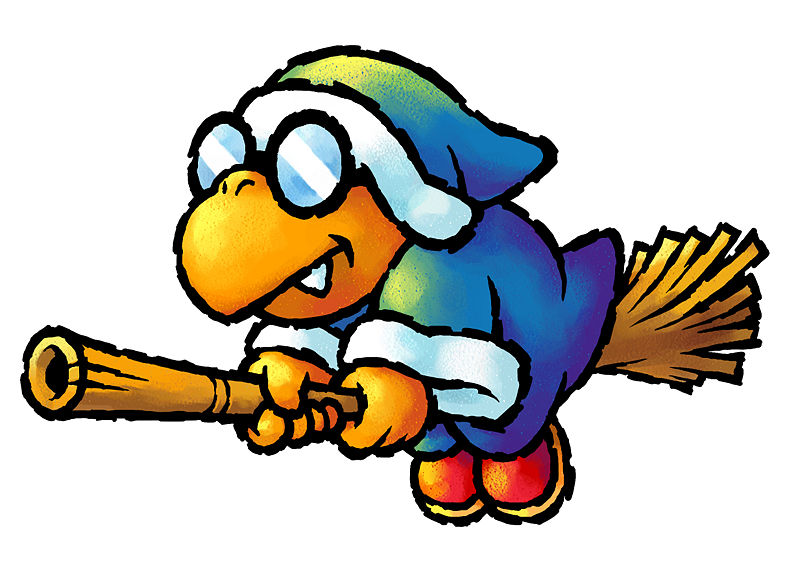 The Kamek of Super Mario World is the young Bowser's caretaker. Upon learning that two babies who have just been born are destined to be problematic to the future King Koopa, Kamek tries to kidnap them, but is thwarted by the Yoshis. During the game, Kamek has his toadies always on call to capture Baby Mario if a Yoshi leaves him alone for long enough, and shows up personally on his flying broom to make the bosses grow in size. I guess he and Rita Repulsa must have gone to the same school of villainy. When he shows up in later games, it's usually as Bowser's right-hand turtle. The Paper Mario games bring in Kammy Koopa, sort of a female equivalent of Kamek, as Bowser's main assistant. I wonder if the two of them are related. 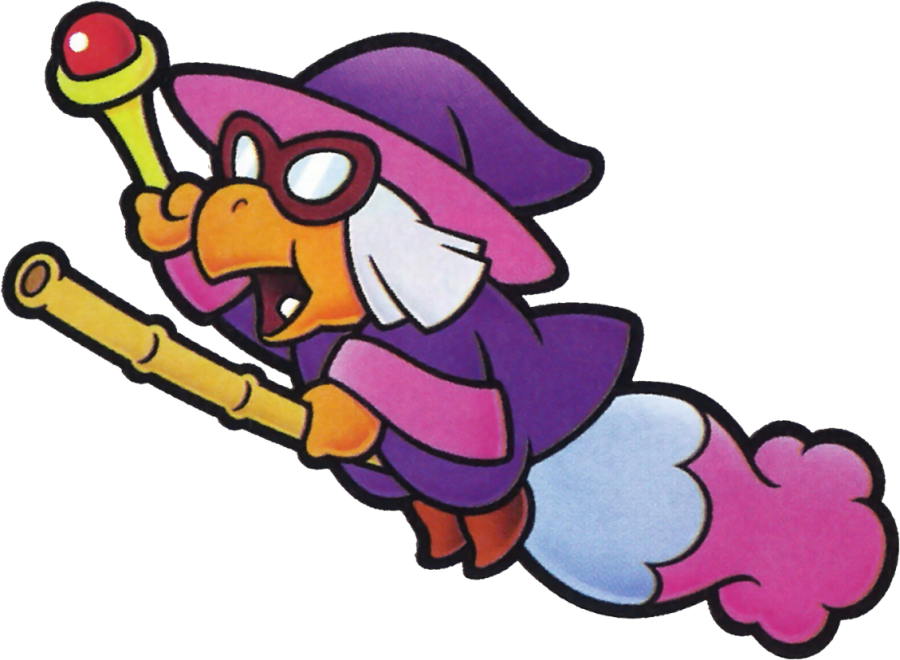 bethje says that Kamek, as he appears in Yoshi's Island, looks like Scooter from the Muppet Babies. I guess I can see that.

I had heard about the theatrical showings of the high-definition version of The Wizard of Oz a little while ago, but I didn't get around to actually checking it out until yesterday. Fortunately, there were still tickets available for a theater in Philadelphia, so I dragged my non-Oz-fan wife

bethje there to see it with me. Actually, I wouldn't call myself a huge fan of the movie either, what with my main loyalty lying with the books. Still, it's Oz, and this could well be my only opportunity to see the film in a theater. (Well, maybe not. I'm sure they'll do something for the hundredth anniversary, and I certainly HOPE to live thirty more years to see that. That's a long time from now, though.) So it was a cool opportunity, and I got a permanent just for the occasion.

Okay, I didn't really, but I DID wear my 1998 Munchkin Convention shirt, with the picture of Mombi drawn by Eric Shanower. Beth doesn't like this shirt, so I don't wear it that often, but I thought this was an appropriate situation. Or does that make me That Guy, like someone who wears the T-shirt of the band they're going to see? I think it's a little different, especially since it's not like anyone involved with either the books or the movie was actually there. {g} And seeing the film in full size with restored picture quality was an enjoyable experience. The movie itself was preceded by a shortened version of the documentary hosted by Angela Lansbury. I noticed that a fair number of people in the audience were laughing at the jokes, which I'm sure they've heard hundreds of times before (and that's even if they HADN'T seen the movie, considering how often it's referenced), but that's not a bad thing.

I guess there isn't really anything to say about the movie itself that hasn't been said millions of times before, but I do have to say that my annoyance at Billie Burke's Glinda only increased. Not only does she refuse to tell Dorothy how to get back to Kansas until the last minute, but she has a simpering smile no matter what's going on around her, and acts totally patronizing to the Munchkins. Hey, just because they're small doesn't mean they're children! Also, I'm not sure I've mentioned before how the movie's Emerald City really seems to be enclosed within one large building. It's obviously not supposed to be, since the backgrounds show buildings and the sky is visible, but it feels a little claustrophobic. Besides, when Dorothy and her companions talk to the guard, there's a carpet nearby, which is used as a prop in the "If I Were of the Forest" number. That seems to suggest it's inside, but nobody entered a building to get there after seeing the Wicked Witch's skywriting. Oh, well. I'm not exactly accomplishing anything by pointing out some flaws in a seventy-year-old movie, am I? {g}

And I suppose that's that. Next year in the Emerald City! I wish, anyway.
Collapse