In The Road to Oz, we're introduced to the Scoodlers, beings based on jumping jacks with which the children of L. Frank Baum's time would presumably have been familiar. Each Scoodler has two front sides and two faces, and a very loose head. They use these heads as weapons, detaching them and throwing them at enemies. Scoodlers live on soup, and they're not above using human flesh as soup meat. When they captured Dorothy's party, intending to make them into soup, the Shaggy Man enabled his companions to escape by using his baseball skills to catch all of the Scoodlers' heads and throw them into a gulf, rendering them essentially powerless.

That's the last time we see them in the main series, but Chris Dulabone wrote a sequel called Dagmar in Oz. In this book, it's revealed that all of the Scoodlers eventually retrieved their heads, with the exception of Prime Minister Xanthascood, who has to make do with an electronic device of his own invention. Dagmar, the Queen of the Scoodlers, journeys to Oz to get revenge on the Shaggy Man, but her plans are thwarted by an Ozian girl named Rachelle, with some help from Xanthascood.

One somewhat confusing aspect of John R. Neill's Scalawagons (and really, that book is pretty confusing overall) is the introduction of the Mifkits, who can also throw their heads. So where did this idea come from? Well, Baum's own John Dough and the Cherub, a non-Oz book that was also illustrated by Neill, features the Mifkets (different spelling, but you have to remember that Scalawagons also refers to the "Gillikans"), a tribe of small beings who are mostly human, but retain some animal-like traits. They live on an island on which John Dough and Chick the Cherub find themselves shipwrecked, and the visitors soon find out that the Mifkets are keeping a shipwrecked couple and their daughter Jacquelin as prisoners. During the course of the story, a Mifket named Black Ooboo (called that because of his hair color) gains extraordinary strength by eating some of John's fingers, and hence absorbing some of the power of the Elixir of Life that animated the gingerbread man. He uses this strength to overthrow the King of the Mifkets, and he eventually teams up with Ali Dubh, the former owner of the elixir, who also wants to capture and eat John. Ali speaks basically the same language as the Mifkets (presumably Arabic), which is explained in the book by saying that the Mifkets are probably the ancestors of the Arabs, but there are plenty of less racist explanations for this phenomenon. Anyway, John, Chick, and the shipwrecked family escape the island with the help of the Fairy Beavers, and that's the last we hear of the Mifkets in that book.

When making the map of the countries surrounding Oz that graces the back endpapers of Tik-Tok, Baum (or whoever made the map; it doesn't look like Neill's work) included lands from most of his non-Oz fantasies, including John Dough. For some reason, however, he disregarded the text by making Hiland and Loland part of the mainland instead of an island, and placing the Isle of Phreex on the other side of Oz. The Mifkets were also moved to the mainland, occupying a territory to the south of Oz adjacent to that of the Scoodlers. The Scoodler territory itself is really too big, as the text of Road indicates that they inhabit a single village. But anyway, it's probably this map that led Neill to confuse the Scoodlers and Mifkets, bringing in a group of creatures that look like Mifkets, but can throw their heads like Scoodlers. They also seem to be smaller than the Mifkets of John Dough (who presumably wouldn't have been able to fit in Uncle Henry's boot) and have wooden teeth.

There's a major Mifket character in Dick Martin's Ozmapolitan, who is said to be from the area of the Great Sandy Waste. He's closer to the original portrayal of Mifkets in John Dough, in that he's about the size of a human child, and there's no indication he can throw his head. His name is Jinx, and while he's grouchy and constantly hungry, he's considerably friendlier than his fellows. He sought his fortune in the Emerald City, and ended up becoming the printer's devil for the Ozmapolitan, the city's primary newspaper. After an adventure with Dorothy and his co-worker Septimius Septentrion, Jinx was promoted to Head Assistant to the Editor. Anyway, since Jinx comes from inland, I think it's quite possible that the Mifkets inhabit the territory shown on the Tik-Tok map as well as the island from John Dough. Perhaps the Mifkits from Scalawagons are the result of interbreeding between Scoodlers and Mifkets. 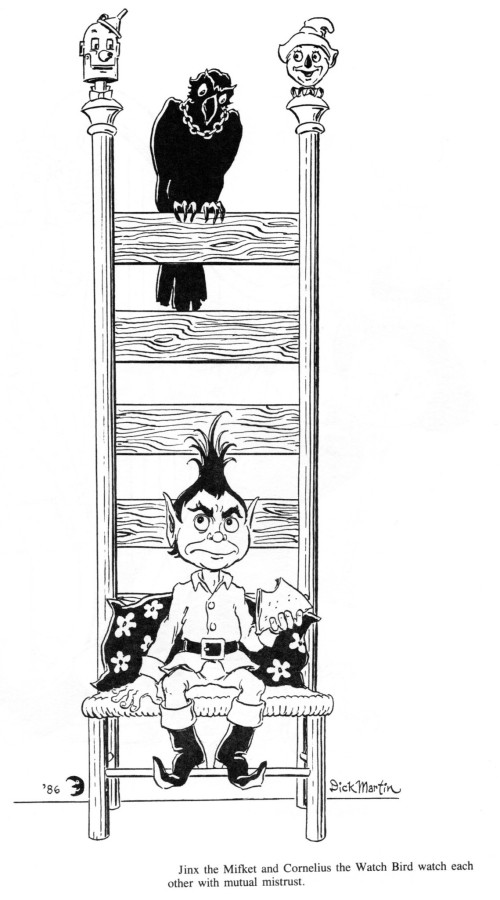 So, I'm still reading books, and two of the most recent ones I've finished are Jasper Fforde's Lost in a Good Book and Diana Wynne Jones's Archer's Goon. The former was the second book in the Thursday Next series, and the interesting thing about this series is how much is packed into it. Not only are there interactions between the real world (such as it is) and those of books, but also alternate history, time travel, genetic experimentation, and an evil corporation. It still works, though, and we see more hopping between books this time. Miss Havisham from Great Expectations plays a major role, and that's a book I haven't read. On the other hand, we do see appearances by two characters I'm quite familiar with, Lewis Carroll's Cheshire Cat and Bellman. I'm going to try to find the next book in the series, The Well of Lost Plots, in a library soon.

Archer's Goon is the second Diana Wynne Jones book I've read. It had less of the traditional fairy tale feel than "Howl's Moving Castle," instead bringing fantasy elements into what appears at first to be a realistic setting. There was some nice build-up here, with new details about the family of magicians who run the town being revealed from time to time, and everything eventually tying together. I just checked out Charmed Life from the library, but any other suggestions you might have for DWJ books are welcome. The woman has written a lot, hasn't she?
Collapse