As we've already seen with Jack Pumpkinhead, Princess Langwidere, and the Scoodlers, heads that can be removed without resulting in death are pretty common in the Oz series. Bill Campbell already covered the topic on his own blog, but I have some elaborations and other examples to add. As mentioned in that post, one of Baum's first uses of the theme was in The Magical Monarch of Mo (originally known as A New Wonderland), in which the Second Surprise is called "The Strange Adventures of the King's Head." In this tale, the nasty Purple Dragon bites off the head of the King of Mo, and his subjects make substitutes out of candy, dough, and wood. The Dragon decides to make further trouble by putting the king's head on a woodchopper's shoulders, resulting in an identity crisis for the poor guy. Everything is eventually sorted out, however, with the heads restored to their proper owners. 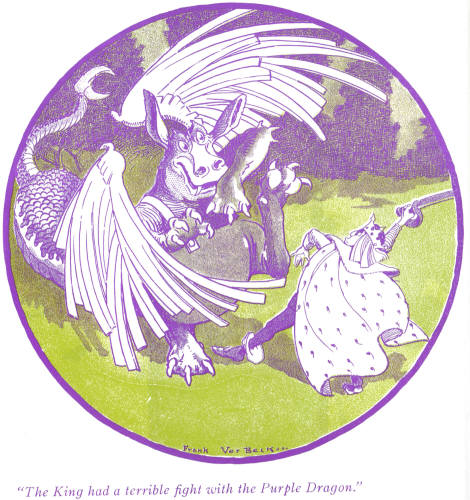 The people of Mo are able to lose their heads and survive because they're functionally immortal, and the same eventually applied to the Ozites, with the first mention of this being in Road. Even before that, however, there were hints that the people of Oz were more resistant to decapitation and dismemberment than anyone in the Great Outside World. This is demonstrated by Nick Chopper, who explains in Wizard that he had all of his body parts gradually replaced with tin ones, which worked just as well. At the time, there's no indication as to what happened to his old flesh parts, but that information is revealed in Tin Woodman. By that time, Baum had thought out the immortality thing in more detail (although he still left plenty of unanswered questions), and decided that the cast-off parts would still be alive. The Tin Woodman has a conversation with his old head, which the tinsmith Ku-Klip keeps closed in a cabinet. The smith used the head of his other tin creation, Captain Fyter, in making the Frankenstein-like Chopfyt. The idea that a still-living head can be replaced by another one results in some interesting identity issues, and Tin Woodman is the book that does the most with that concept.

Ruth Plumly Thompson's Grampa also uses a lost head as a plot device, with the beginning showing influence from the Mo story. During a bad rainstorm, King Fumbo of Ragbad's head actually blows off, and Prince Tatters and the soldier Grampa go to search for it. In the meantime, the baker cooks a replacement head for the hapless monarch. Without giving too much of the story away, I think I can say that Tatters and Grampa succeed in their quest, and Ozma helps to attach the head more tightly than before.

This post isn't intended to be an exhaustive list of disembodied heads in the Oz series, but I do feel I should mention the Headmen from Silver Princess. These inhabitants of Headland, a small rocky area in the northeastern corner of Oz, are heads with giant ears that they use to fly around. When strangers intrude in their territory, they try to decapitate them (or, from their point of view, "debodicate" them). Their leader is described as an "ugly little Mugly," and Who's Who in Oz actually lists his name as Mugly. This probably wasn't Thompson's intention (I know she used the term "ugly mugly" in at least one other Oz book), but since the character is otherwise unnamed, I guess that's as good a name as any.
Collapse