Are you ready for more Ozian bears? If not, then I guess I wouldn't read the rest of this post. In The Gnome King of Oz, when Scraps is appointed Queen of Patch, she meets the former Queen Cross Patch's pet, a small bear named Grumpy. This seems to have become a popular name for ursine characters. The Care Bears have a Grumpy, and I believe some other toy line (maybe Raggedy Ann?) also includes a Grumpy Bear. I suppose it's a popular archetype. Anyway, despite his temper, the Ozian Grumpy is actually quite friendly, and serves as a good companion to Scraps and Peter Brown on their journey from Patch to the Emerald City. On Grumpy's first night in the capital, Ozma gives him a bare room in the back of the palace, and perhaps he still lives there now. While sort of a pet to the Patchwork Girl, the pet-human relationship is obviously quite different when the pets are sentient.

My favorite bear in the Oz series, however, shows up in Ojo in Oz. When Ojo is kidnapped by a band of gypsies, he meets a fellow prisoner, a bear who was lured into the gypsies' clutches with honey. (Winnie-the-Pooh had been published just seven years prior to Ojo, so I guess it's possible this was an intentional reference to Pooh's honey obsession, but I'm not sure how likely this is. I mean, bears really DO like honey, after all.) The roving band forced the bear, whom they called Rufus, to dance, beg, and play the accordion at fairs. When he befriends Ojo, he says that his real name is Snufforious Buxorious Blundorious Boroso, which Ojo decides to shorten to Snufferbux. Considering that his first three names look like they could be adjectives, I would think that simply "Boroso" would have also worked as a nickname, but what do I know about bear names? Besides, "Snufferbux" is a fun name to say, and seems somehow appropriate. Thompson presumably intended the similarity to "snuffbox," although there's no actual connection or pun there as far as I can tell. Broadly speaking, Snufferbux fits into the common Thompsonian mold of sarcastic and curmudgeonly but fiercely loyal animals, of which Kabumpo is the most frequently used example. Anyway, when he and Ojo end up traveling with a bandit chief called Realbad, the bear is quite eager to protect the boy from the outlaw, who has expressed a wish to turn Ojo over to the nasty magician Mooj for a large reward.

Neither Grumpy nor Snufferbux plays an important role in any later books, but they do both appear at the celebration in Wishing Horse. Also, the endpapers of Wonder City show a bear labeled "Sniffer." Was this supposed to be Snufferbux? It certainly looks like him, but Neill didn't always vary that much in how he drew animals of the same sort. And if it is Snuffer, was he ever intended to have a role in the book? Presumably not, since no one who's read early manuscripts of Wonder City mentions his having appeared, but who knows what Neill originally intended? Maybe he just liked drawing the character. 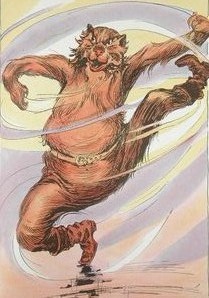 So, here's a question that came to mind about a week ago, and I'm finally getting around to asking it. What do you think when writers stipulate that they want their works destroyed when they die, and is it right or wrong for someone else to go against their wishes (as happened with Kafka, if I remember correctly)? I can understand the latter being an ethical problem, but perhaps it's my socialist tendencies that make me think that, just maybe, an author shouldn't be ALLOWED to have his or her work destroyed. Yeah, I know that the right to distribute your work also includes the right NOT to do so, but we all know that authors aren't always good judges of their own work, and this could result in the world being deprived of some valuable writing. And really, if they're alive and don't want to know the public's reaction, that's one thing. But once they're dead, what's the issue? Maybe if you believe in an afterlife, there's the danger that the author's ghost will be hanging around, reading bad reviews, and thinking, "See, THAT'S why I never released it during my lifetime!" But, well, I don't; and if it turns out I'm wrong, the spirits of the dead have plenty of time to get over it. I'd be interested in knowing what you readers think, though. I'll also ask a related question: What do you think of other writers continuing the work of a deceased author? I can't say I'm opposed to it (I guess I really CAN'T be after admitting Snufferbux is one of my favorite Oz characters, can I?), and while I do think the later authors can rarely recapture the same magic, sometimes a continuation by someone is better than nothing at all. That depends on the quality, though.
Collapse