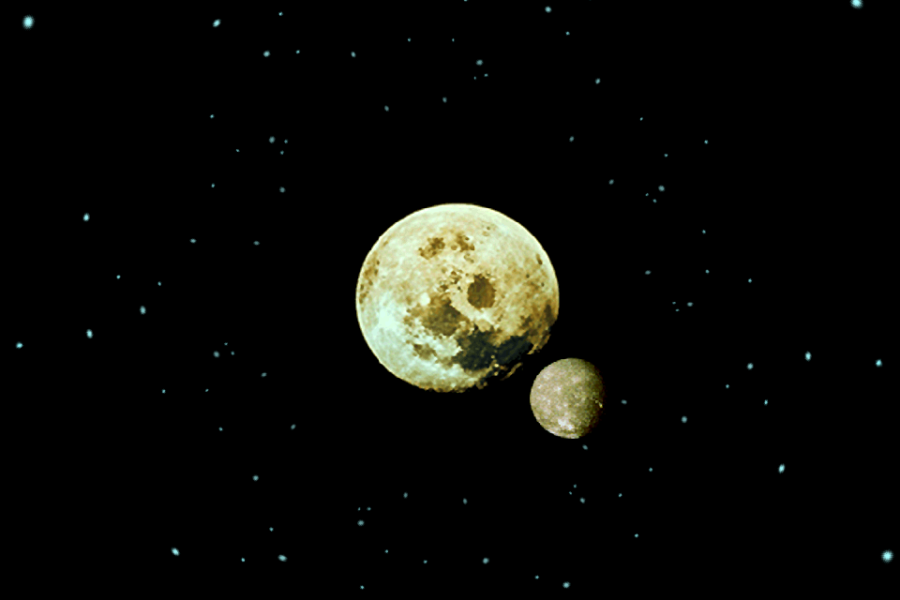 After my post on lunar mythology last Saturday, I've been trying to think of other moon-related posts I can make. I went with balloons and rubber for my Oz posts, although maybe they can be tied in through Notta Bit More's song in The Cowardly Lion of Oz about the moon being a balloon held by the Sandman. L. Frank Baum actually used the Man in the Moon in at least two stories. Mother Goose in Prose includes an adaptation of the nursery rhyme about the Man in the Moon visiting Norwich and burning my mouth on cold pease porridge, with Baum offering an amusing explanation as to how such a thing would occur. Queen Zixi of Ix has the fairies of Burzee asking the Man in the Moon to decide on the recipient of their newly-made magic cloak, and if I remember correctly the film version (known as The Magic Cloak of Oz) shows him as simply a face in the moon. John R. Neill also added the Man in the Moon to his drawing of Mr. Tinker visiting the satellite.

Anyway, since Wednesday is often video game day here at Stratovania, I tried to think of video games that utilized the moon, and the one that immediately came to mind was Final Fantasy IV. This game takes place on a world with two moons, one of which was artificially constructed by the inhabitants of a planet between Mars and Jupiter when their old home blew up. (Yes, apparently the Final Fantasy solar system is basically the same as ours.) They became known as Lunarians, and spent their time sleeping inside the Lunar Palace. That is, until a Lunarian named KluYa decided he wanted to visit the Earth, where he introduced several new technologies, and married an Earth woman who bore him two sons. Late in the game, your characters, led by KluYa's son Cecil, find the Lunarian's old spaceship and fly it back to the moon, where the final battles of the game take place. While the main location there is the palace, with the main villain Zemus lurking far underneath it, the natural satellite is also the home of the dragon Bahamut, a mainstay of the series, whom Rydia can summon if the party beats him in battle. A village there is inhabited by the Humingway family, of which the infamous Namingway is a member. He somehow journeyed to Earth to enter the business of changing people's names, and he shows up in pretty much every town. I also feel that I should mention the Pink Puffs, elusive inhabitants of the Lunar Palace basement who will very occasionally give you a pink tail when defeated.

Continuing with the lunar theme, here's a song that comes to mind when I think of the word "moon." No, not "Blue Moon," "Paper Moon," or "Whalers on the Moon," although those are also good ones. I'm speaking of "Nightgown of the Sullen Moon" by They Might Be Giants, which originally appeared as a B-side on the They'll Need a Crane EP in the late eighties, and later reappeared on the Miscellaneous T and Then: The Earlier Years collections. The liner notes for the latter say that the name came from a child's drawing, and later turned out to be the name of a book. The book is real, and apparently deals with the phases of the moon, but the notes suggest that John Linnell wasn't aware of it when coming up with the song. The "child's drawing" explanation sounds suspiciously similar to what John Lennon said about "Lucy in the Sky with Diamonds," and it does seem like the Johns (of TMBG, that is) have an interest in Beatles anecdotes. Linnell's solo song "Idaho," for instance, is based on an apocryphal story about Lennon dropping so much acid that he thought he needed to stay up all night and drive his house. Also, the same EP as "Nightgown" features the John Flansburgh song "I'll Sink Manhattan," about which he's told a story along much the same lines, namely that the title came from a piece of Manhattan graffiti that turned out to be referring to a band, but Flansy didn't find this out until after the song had been released. Anyway, "Nightgown of the Sullen Moon" is certainly an intriguing title, and I could see the Johns wanting to use it for a song without bothering to check on its original source. Hey, I've done the same kind of thing myself.

While a somewhat obscure part of TMBG's oeuvre, "Nightgown" seems to be a favorite of many fans. I know I've read accounts of people asking why the band never plays it live, to which the response was that Flans didn't find it fun to play. Makes sense, but you'd think it wouldn't get too boring if they just brought it out occasionally. I have heard "It's Not My Birthday," another B-side from the same EP (and probably my personal favorite TMBG song) played live a few times, so why not "Nightgown" as well?

The song is pretty typical of early TMBG, with a catchy, peppy melody accompanied by somewhat bizarre and possibly disturbing lyrics. I don't think there's ever been an official explanation as to what the lyrics actually mean, but it kind of seems like it's about a sudden loss of consciousness, or something of the sort. It specifically says it's "not a drug trip," so there's no need to take that direction with an interpretation. The lines "looking up and abruptly forget what you're thinking/fire alarms go off in your head" make me think of the Kurt Vonnegut short story "Harrison Bergeron," in which people with above-average intelligence are handicapped by being equipped with devices that interrupt their thoughts with loud noises every once in a while. Linking it to another TMBG song, there's a "screaming fire engine" in "The Statue Got Me High." Living in Brooklyn as they do, the Johns are probably quite used to hearing alarms and sirens. The line "there's a feeling of boredom of the big whoredom" brings to mind the band's song "The Big Big Whoredom," but I don't know which came first. I believe I've read the line "forever is a long time" somewhere (it might have been in Catch-22), but I don't know if that's where it originates.

Any other thoughts on this song? Are there any other songs you'd like me to address? Let me know!
Collapse