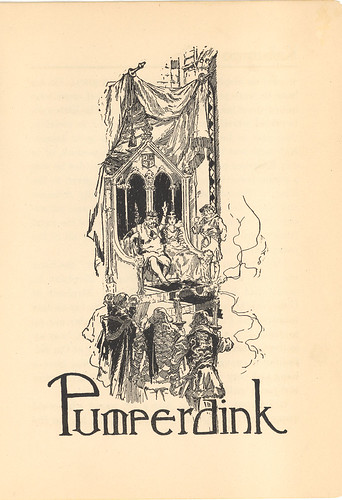 Ruth Plumly Thompson introduced many small kingdoms throughout Oz, but one of her most famous and most visited is Pumperdink, in the north central Gillikin Country. The name is a typical one for Thompson, having a silly sound without coming across as TOO ridiculous. I'm inclined to think it's sort of a combination of "pumpernickel" and "Humperdinck." Actually, Pumperdink predates Thompson's Oz books, having been the setting of several short stories and poems that Thompson wrote for the Philadelphia Public Ledger. Most of these feature the royal family, but they're somewhat vague on the actual identities of the monarchs. When she brings the kingdom into Oz in her second Oz book, Kabumpo in Oz, she's much more specific about these characters. The ruler is King Pompus the Proud, whose personality is about what you'd expect from that name, but is a good king when his infamous temper isn't getting the best of him. His wife is the kindly Queen Pozy Pink, and their son is the handsome and dashing Prince Pompadore. The most famous inhabitant of the kingdom, however, is Kabumpo the Elegant Elephant, an honorary member of the royal family. 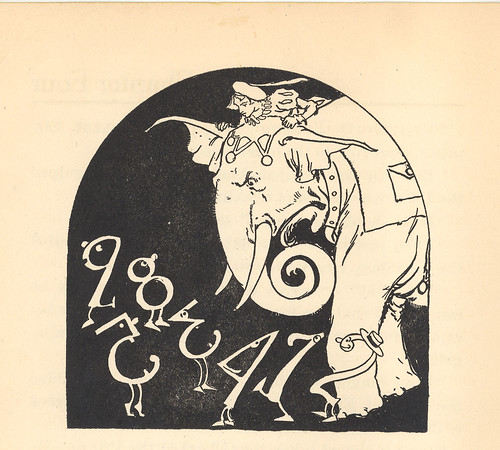 The plot of Kabumpo involves the elephant accompanying Pompadore on his quest to find the proper princess, and hence save Pumperdink from a spell cast by the evil wizard Glegg. Kabumpo initially thinks the proper princess must be Ozma, but after she refuses, Pompa ends up marrying Peg Amy of Sun Top Mountain. At some point in between books, they have a daughter called Princess Pajonia, who is four years old at the time of Purple Prince. In this book, Pompus' brother Kettywig teams up with the bitter old crone Faleero of Follensby Forest to take over Pumperdink. This time, Kabumpo and his new attendant Randy seek the help of Jinnicky in restoring the status quo. 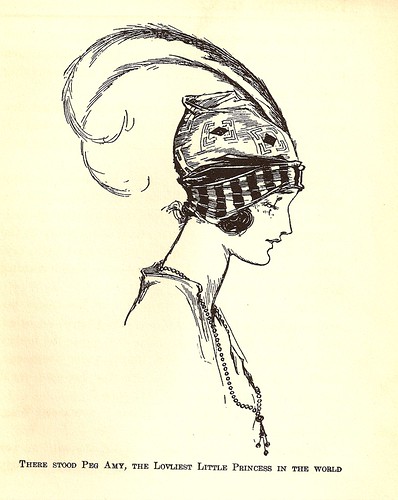 During the course of these tales, we learn some interesting facts about Pumperdink. One is the tradition of lawbreakers being dipped in a well full of blue ink. The well isn't used much these days, so the current Chief Dipper's position is largely ceremonial, and he spends most of his time writing poetry. The well was used quite a bit during Faleero's brief reign, however. Another important official in the kingdom is the Prime Pumper, who's basically a prime minister. At the time of Kabumpo, the Prime Pumper is a timid and foolish man who tries to rush Pompadore into a marriage with Faleero. In Purple Prince, the Pumper expresses support for Kettywig in an attempt to save himself, and flees into the woods when Pompus is restored. The King gives the position to General Quakes, the leader of his army, but we don't know whether Quakes also took the title. Considering that the old Prime Pumper is never given a name but simply referred to by everyone as "Pumper," it's quite possible that Pompus prefers not to use the title anymore.

By the way, do Thompson's other Pumperdink stories take place in the Ozian kingdom, or just another imaginary place with the same name? As I'm generally someone who likes to tie everything together, I prefer the former, but there are some difficulties with this. For instance, while many of the stories refer to a king, queen, and prince, "The Wizard and His Purple Beard" also mentions a king's daughter, and Pompus presumably doesn't have one of those. Incidentally, this story was adapted into comics form by Eric Shanower and Anna-Maria Cool, and this version (renamed "The Wizard of Pumperdink") pictures Pompus and Kabumpo. It also changes the wizard's purple beard to a purple polka-dot one, presumably so the story would work in black and white, but it also helps to explain why a purple beard would be at all odd in the Gillikin Country. Anyway, in order to resolve such discrepancies, I'd like to bring forth the possibility that these stories might take place at different times in Pumperdinkian history, hence the king is sometimes Pompus and sometimes an ancestor of his. The other Pumperdink stories that I've read are:

The Apple Pie Princess - A poem, reproduced in The Wizard of Way-Up and Other Wonders, about how the prince marries a girl who restores his appetite by baking him an apple pie. This prince obviously isn't Pompadore, but I kind of like the idea that it might be Pompus as a young man, with the Apple Pie Princess being Pozy Pink.

The Dragon of Pumperdink (originally called simply "A Story About Dragons," even though there's only one dragon in it) - During a harsh winter, a dragon from the mountains takes a position as furnace in the castle of Pumperdink. Oz generally doesn't seem to HAVE harsh winters, but perhaps Pumperdink's valley location makes it receive precipitation that most of the land doesn't get.

Christmas in Pumperdink (AKA "Christmas with the Prince") - Per the advice of Jan the Jester, the Prince (who could be Pompa, but doesn't have to be) gives away his possessions to the villagers, and gives his parents the pleasure of getting him all new things for Christmas.

The Laughing King, a Page Out of Pumperdink History - The King of Pumperdink abdicates, and decides to seek his fortune in laughing. Obviously not Pompus, who seems to be angry more often than jolly, but perhaps an earlier king.

Are there any other Pumperdink stories I haven't mentioned? Those were the only ones I could find in Oz-Story and the Oz Club's two compilations of Thompson's work. I do feel it worth mentioning that Sissajig and Other Surprises also contains a story called "The Fairy's Silver Trumpet" (hey, isn't that the title that

arfies uses for her journal?) that takes place on Sun Top Mountain, the old home of Princess Peg Amy.