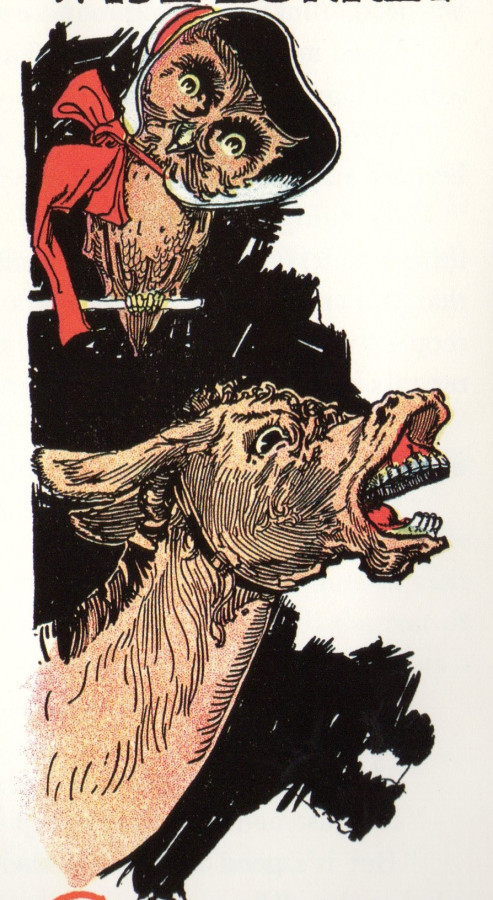 L. Frank Baum had an interest in reversing stereotypes, which was most obvious with the Cowardly Lion, but perhaps even more blatant with the odd couple known as the Foolish Owl and the Wise Donkey. I believe John Bell once listed the two of them as being akin to a married couple, which they sort of are, despite being different species, and so presumably not taking part in THAT aspect of marriage. They do keep a home together, and work as partners.

The Wise Donkey is actually a crossover character from another Baum fantasy, The Magical Monarch of Mo. In this book (specifically in the Fourth Surprise), we learn that he was once not very bright at all, but after being locked in a schoolhouse and eating all the textbooks, he absorbed the knowledge in them and became quite intelligent. He gives useful advice to the King of Mo and his subjects on various occasions throughout the book. When he appears in The Patchwork Girl of Oz, he explains that he was visiting Oz from Mo when Glinda placed an invisible barrier around the former land, resulting in his being stuck in Oz. He never specifies how he managed to cross the desert, but I'm actually thinking of making that a plot point in a manuscript I've started.

The Foolish Owl is presumably native to the Munchkin Country, being blue in color, and dressing in a blue sunbonnet. She (yes, the Owl is female, which people tend to forget) speaks in verse that's largely nonsensical, but does sometimes show insight into character. Both the Donkey and the Owl appear in

dennisanfuso's The Astonishing Tale of the Gump of Oz, and I have plans to use them in a story myself, although I haven't actually written any parts for them yet.

Speaking of my own Oz writing, does anyone want to read any of my works in progress? Any input on them would be welcome, and I'd be glad to try to help out anyone else who's doing Oz writing.

bethje and I didn't watch the cartoon lineup last night due to being out to dinner, but we saw the tape today. Yeah, that's right, we don't have any fancy TiVo or DVR, and we're living like it's still the eighties! But anyway, I thought it was a pretty good batch. While they did a few Olympics-related bits on The Simpsons before, I think this was the first episode centered around the games, and they did a good job with it. There were a few gags that they drew out way too long, like the Curly tryouts, but most of it worked. It was also cool to see some background for Agnes Skinner, although I have to suspect that they keep changing Principal Skinner's back story on purpose. Was the baby who messed up Agnes' pole vault the Seymour Skinner we know, or the supposed real one from "The Principal and the Pauper"? And was Sheldon Skinner from the Hellfish episode Seymour's father or not? I don't think we're ever supposed to know. By the way, Lisa's pin collecting reminded me of this post on Olympic mascots that I read today. It looks like the full-body version of the mascot Bart made was at least partially inspired by the rather disturbing Neve and Gliz.

As for Family Guy, it was interesting to see bonding between Chris and Stewie, which we haven't seen too often in the past. The psychic plot was also good for a few laughs, and there were some amusing cutaway gags. American Dad had a pretty weird story this time, but I enjoyed it. For what it's worth, I don't think Hershey Park actually has a Tunnel of Love, although it DOES have a Kissing Tower. Then again, this was Hershy Park, with only one E, so I guess it would be a little different. {g}
Collapse