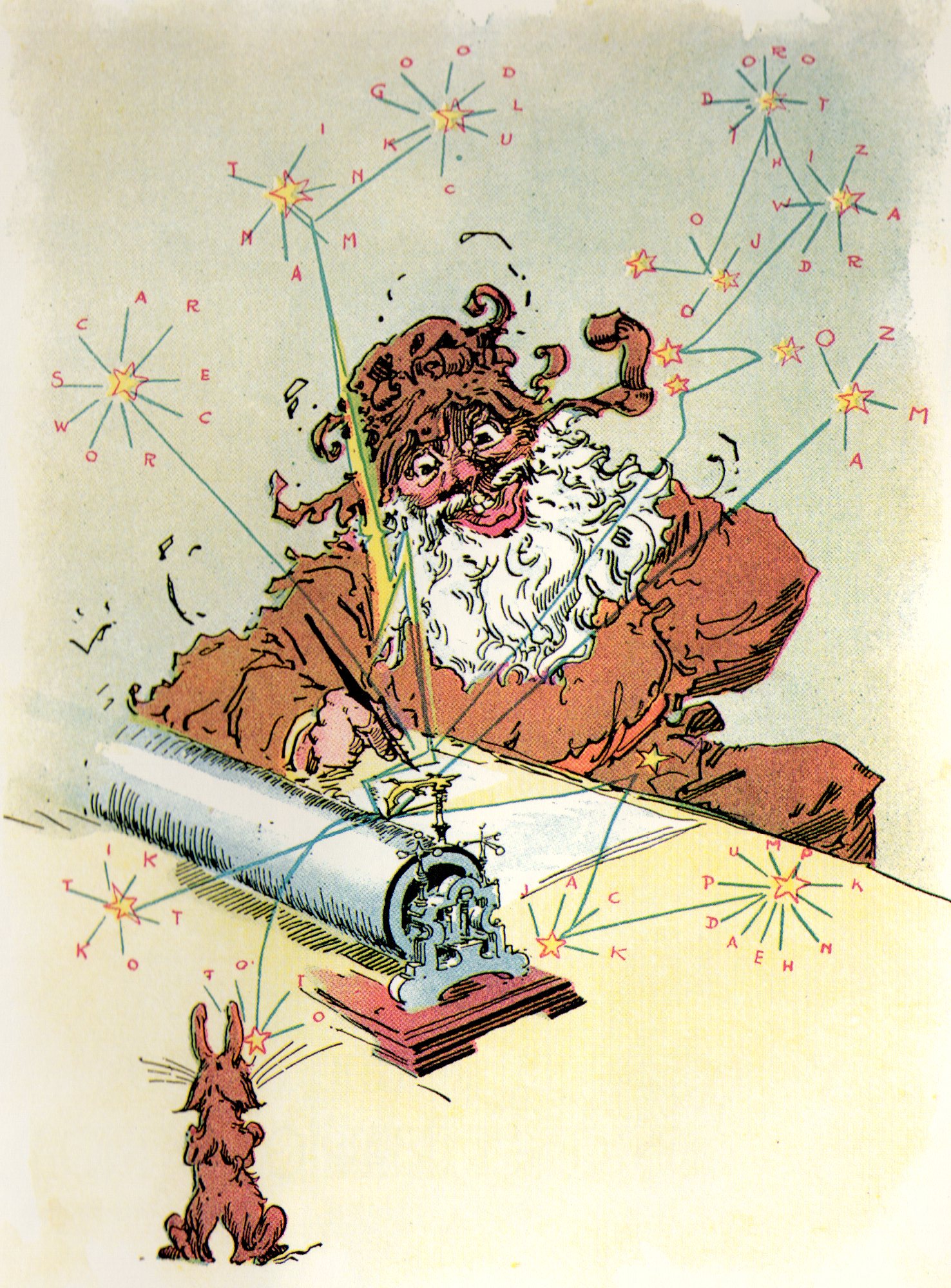 Today's topic is communication in Oz. While we do see some indications of Oz having radio technology, and the Shaggy Man has a device quite similar to a mobile phone in Tik-Tok of Oz, such things don't appear to be very common. We never see an Ozian house with a telephone or a radio. According to Magical Mimics, the Wizard of Oz has a radio in his tower workshop, but that's an exception rather than a rule. So how do Ozites communicate? Well, I've always assumed Oz has a postal service, although we don't really see it in operation. There's a mailbox in Enchanted Island, and the non-canonical Laughing Dragon has mailbox-like creatures called Posties who are required to deliver any letters placed in them through the Royal Mail of Oz. There are also some examples of birds carrying messages. In the final, fourth-wall-breaking chapter of Emerald City, L. Frank Baum receives a message from Dorothy on a stork's feather. Handy Mandy has the Wizard mention getting a message from Glinda via pigeon post. Rachel Cosgrove's author's notes identified a talking bird as her source for news from the fairyland. I have to suspect there are more examples than that, but I can't think of where they might be. Some have speculated that the "swift messenger" mentioned by the Good Witch of the North in Wizard (who must have been VERY swift to relay the message that Dorothy's house had landed on the Wicked Witch of the East before Dorothy herself had emerged from it) might be a bird, and perhaps even a swift, although March Laumer assigned the role to a boy named Zippiochoggolak. Turning to other non-canonical sources, Karyl Carlson and Eric Gjovaag's Queen Ann has a Mailbird service in operation throughout Oz, while Margaret Berg's short stories refer to the Crowegram system of messages delivered by crows. I think it's quite likely that the Ozian postal service primarily employs birds, although there are perhaps some humans or other animals working there. A story about the post office might be interesting, but would it come across as too derivative of Terry Pratchett's Going Postal, which is about the Ankh-Morpork post office?

I've addressed the issue of person-to-person correspondence, but what about mass communication? As I've indicated, Oz doesn't have much in the way of radio or television (although perhaps the Magic Picture qualifies as a certain version of the latter), so we're pretty much left with newspapers. In 1904, Reilly & Britton came up with the interesting promotional device of printing an Ozian newspaper, known as the Ozmapolitan. How much Baum was involved in the process isn't entirely clear. Ruth Plumly Thompson, however, ran with the idea, coming up with several Ozmapolitans to promote her own books. Hungry Tiger Press has most of the Ozmapolitan issues available to read, although I know the International Wizard of Oz Club put out a few others, including one advertising Wicked Witch. Dick Martin, who was most likely quite heavily involved with the Ozmapolitans from the sixties, wrote an entire book dealing with the newspaper as it operated within Oz itself. The story ends with the hero Septimius Septentrion (or Tim for short) becoming the head editor for the paper. The book mentions the Wizard as founder of the paper, which fits with his editorial credit in the Thompson Ozmapolitans, but the very first issue actually refers to the Wogglebug as the editor. Tim seeks to increase the distribution of the paper outside the Emerald City by sending it out with wandering merchants, and there some suggestions that it's the only newspaper in Oz. I'm not sure this is the case, though, as Rundelstone mentions the Gillikin Times. And according to Queen Ann, the Emerald City Mirror, a now-defunct promotional material printed by Books of Wonder, exists within Oz itself.

At this point, you know what might well bother me most about the ongoing Tiger Woods coverage? It's not even interesting! He didn't offer to rub falafel on someone's boobs. He didn't get a blow job in the Oval Office. He didn't come up with some hilariously lame cover story involving the Appalachian Trail. He isn't a hypocritical megachuch pastor or values voter. He's just some dude who cheated on his wife. Who cares? Figures that a golfer would be involved in a scandal just as dull as the sport he plays.

Aside from the increased publicity (and they say there's no such thing as bad publicity, but I don't know that I agree with that), I think why Tiger is playing along with the media is that he lost a lot of his lucrative endorsements. That also doesn't make a whole lot of sense to me. I mean, the companies that paid him to endorse their products can make their own choices, but I have to wonder what marketing person would say, "This guy cheated on his wife? That's not the image we want for our sneakers!" How is it even remotely relevant? Oh, but he's a bad role model! So what? Isn't it an important lesson to learn that celebrity athletes are human, and do stupid things? What I really have to wonder is why Tiger even got married in the first place if he wanted to whore around. Or does the wife date back to the days before he was famous? Regardless, why are they still married now? I'd have to suspect that anyone who'd stick with her husband after he cheated that many times either doesn't care (in which case an apology is hardly necessary) or is extremely gullible ("Sure, he cheated 300 times, but I believe him when he says he won't again!"). I don't really know the circumstances, though. Maybe they're staying together for financial reasons. Hey, I know how that is.
Collapse