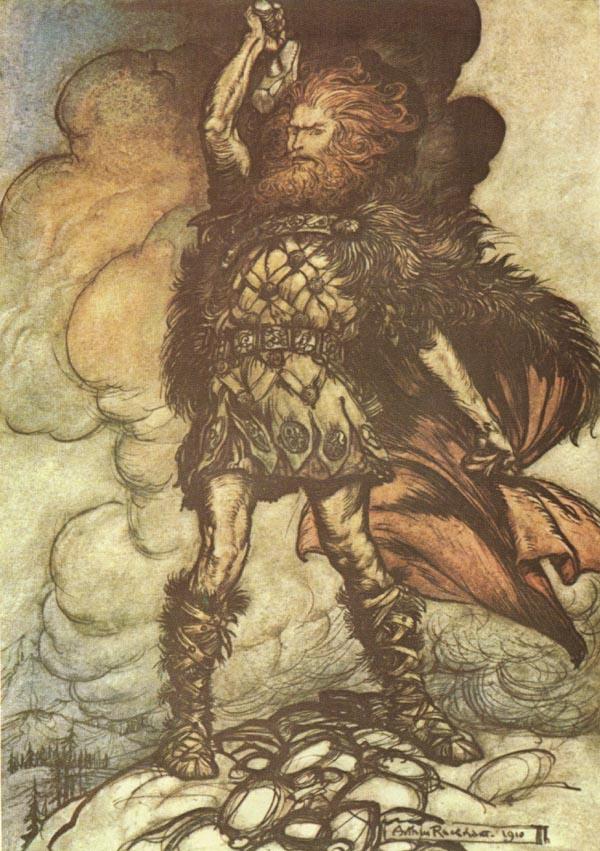 When I think of extremely masculine characters in mythology, the Norse god of thunder immediately comes to my mind. The huge, muscular, red-bearded warrior seems to personify everything the Vikings would have considered manly, and their ideas on the subject really aren't too far from those of our own society. Mind you, the area of the world where the worship of Thor originated now enjoys a higher standard of living than we do. It's like they went through the "might makes right" phase centuries ago and are now able to concentrate on social issues, while the United States is still mired in a warlike mentality. Not that I believe all societies go through the same stages. I mean, look at the Middle East, the former cradle of civilization, where they're still fighting the same absurd territorial disputes they've been involved in for thousands of years. But anyway, this post isn't supposed to be about societal development, but about Thor.

The thunderer was one of the most popular deities in Germanic culture, enjoying greater success than his father Odin among the lower classes. If I'd had the choice, I probably would have favored the one-eyed wanderer over the hammer-bearer. Then again, according to this page, worshippers of Odin practiced human sacrifice while those of Thor did not. The red-bearded one seems to have spent a good deal of his time fighting the giants, the traditional enemies of the Aesir. His main weapon was, of course, his hammer Mjöllnir, a powerful weapon with an abnormally short handle, which is quite possibly why he had to throw it. The story has it that the dwarves known as the Sons of Ivaldi made several items of great value for the Aesir, including Odin's spear Gungnir. Loki then bet the dwarven brothers Sindri [1] and Brokkr that they couldn't make more beautiful artifacts, and turned into a fly to try to sabotage their work. Loki lost the bet, but the hammer's handle came out short thanks to his interference. 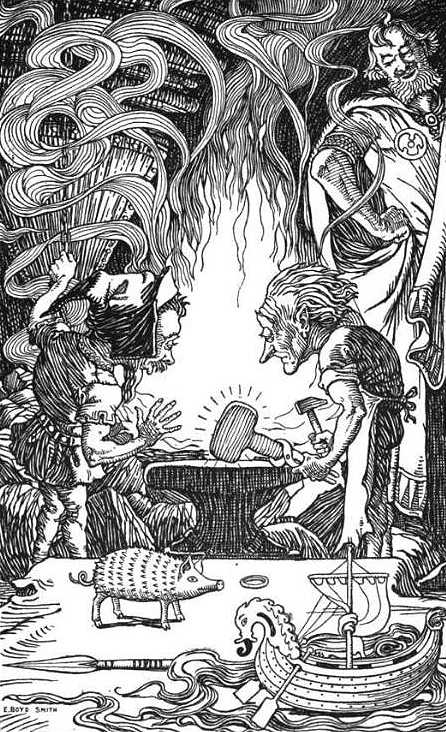 In addition to the hammer, Thor also wore a belt and iron gloves that increased his strength. He travels in a thundering chariot driven by two goats, Tanngrisni ("gap-tooth") and Tanngnost ("tooth grinder"). I've said before and I'll reiterate that the Norse gods really knew how to accessorize. He was able to roast the goats when hungry, and then bring them back to life and vitality with the power of Mjöllnir. That is, except when a farmer's son broke one goat's leg bone, so that the animal now walks with a limp. 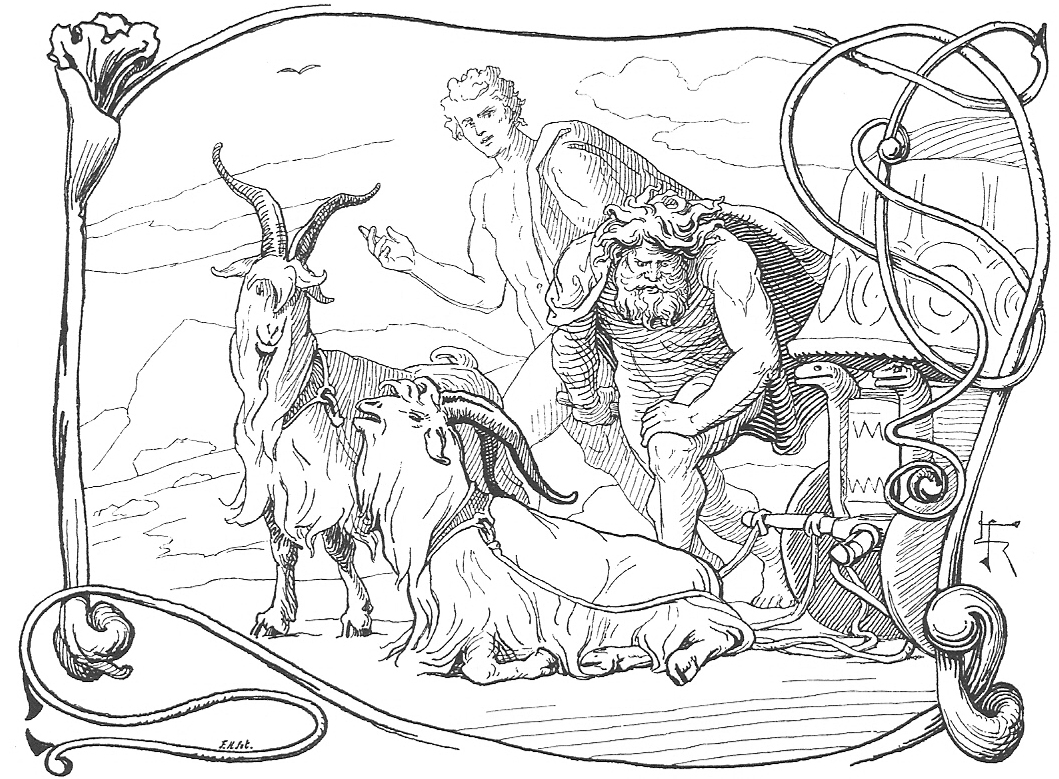 One thing I'm kind of curious about is how well Thor got along with Loki. I've always kind of had the idea that, while Loki was friends with Odin, Thor really didn't like him much. In the known Norse myths, however, Thor and Loki are often seen working together. True, Loki was responsible for ruining Mjöllnir's handle, but it doesn't look like that was the result of a personal grudge against Thor. While I'm not that familiar with Thor's Marvel Comics series, I believe they DID make Thor and Loki enemies, so maybe hearing about that was how I got the idea. I don't know. Loki has always struck me as someone whose primary motivation is having fun, so I suppose it's not too difficult to see him as sometimes working with and sometimes against the thunder god.

Thor's family life is recounted in some Norse legends, but it's kind of sketchy. His wife is the golden-haired fertility goddess Sif, but the giantess Járnsaxa is the mother of one of his sons, Magni (meaning "strong"). Magni is said to have rescued his father from underneath the foot of the giant Hrungnir, accomplishing this when he was a mere three days old. Thor has another son named Modi (meaning "anger") and a daughter named Thrud, but I don't believe their parents were specified. The sons are mentioned as inheriting Mjöllnir after Thor and the Midgard Serpent kill each other at Ragnarok.


[1] For what it's worth, I believe Sindri is also the name of Björk's son. I don't know if there's any connection there.
Collapse