For this week's video game post, I had some questions that didn't have any obvious answers, so I consulted the Mushroom Guru on Tall Tall Mountain. Or was it Big Cold Mountain? Regardless, it was quite the trek, so I hope it was worth it. Here's what I asked him, and what his answers were:

1. Are Mario and Luigi originally from Brooklyn or the Mushroom Kingdom?
Their parents, native Brooklynites, were secret government agents on duty in the Mushroom Kingdom when their famous children were born. So they were born in the kingdom, but are still American citizens.

3. What are those small castles that Mario goes into at the ends of levels in the original Super Mario Bros.?
They belonged to local barons, but when Bowser took them over, most of the barons relocated to the Royal Home for Displaced Nobles.

4. If SMB2 is all Mario's dream, why do enemies from the game reappear in other ones?
Isn't there something about dreams always using recognizable faces from real life? In the case of some of the enemies, like the Shyguys, Mario probably vaguely remembers them from his childhood experience on Yoshi's Island. Also, there are ways to move from the dream world to the real one, which Wart and his minions sometimes do.

5. Why does the vegetable-hating Wart have a vegetable-making machine right there in front of him?
That's actually the Dream Machine he used to take over Subcon. A malfunction resulted in its being stuck on vegetables, and Wart was waiting for a repairman when Mario and his team barged in on him.

6. Who are the seven Bowsers that you fight in SMB before coming to the real one?
Well, Bowser's original plan was to use body doubles, only to realize that he couldn't subject anyone as handsome as he was to such obvious danger. So instead, he obtained a bunch of cheap Bowser suits at an after-Halloween sale, and put them on various grunts.

7. Why is Mario no longer dating Pauline?
He was always leaving the toilet seat up, and Pauline told him, "If I wanted to live with a big ape, I would have stayed with Donkey Kong!"

8. Does Yoshi talk, or just say "yoshi"?
While the language that Yoshis use among themselves seems to consist entirely of one word, they are capable of human speech, and most of the ones who spend a lot of time around people use it.

9. In those worlds where Bullet Bills appear to be coming out of nowhere, where are they actually coming from?
An aerial gunner flying just far enough out of Mario's reach that he can't just knock it out of the sky. It's believed to have been a prototype for the airships in SMB3.

10. What's with the bridges that are held together by axes?
They were a peculiarity of the famous castle builder F. Agaricus Toadson, who insisted in putting trick bridges in every castle even though no one asked for them. "They'll be fun at parties!" he insisted.

The guru will only allow ten questions per week, so we'll have to wait until next time to see his explanations for other tricky Mushroom World issues. Do you have any questions of your own, regarding the Mario series or other classic video games? If so, let me know, and I'll relay them to the guru. Topics I hope to cover in future posts include power-ups and cartoon adaptations.

Since it is St. Patrick's Day (for another hour, anyway), I figure I might as well write a little about a famous figure from Irish folklore. 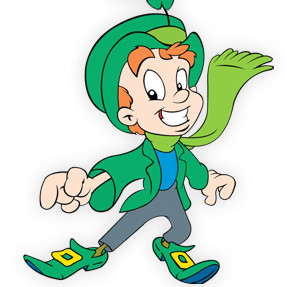 No, not Lucky C. Leprechaun, although he's important as well. I'm taking about the giant warrior Finn MacCool, who HAS to be cool, because it's in his name! Okay, a more accurate rendering of the Gaelic is Fionn mac Cumhaill, but it's PRONOUNCED "Finn MacCool."

Cumhaill is the name of his father, an Irish war leader, who eloped with the druid Tadg mac Nuadat's daughter Muirne shortly before dying at the hand of Goll mac Morna. Muirne left Finn to be raised by a warrior woman and a druidess. In his adult life, he became the leader of the Fianna in Goll's place. He gained the power of knowledge and prophecy by eating a piece of salmon skin, and performed many great deeds, including slaying a destructive fire-breathing fairy and saving a castle from an old hag and her sons. Like Paul Bunyan in American tall tales, he's also credited with creating some natural features in Ireland. The Giant's Causeway and Isle of Man supposedly came into being during a battle between Finn and a Scottish giant. 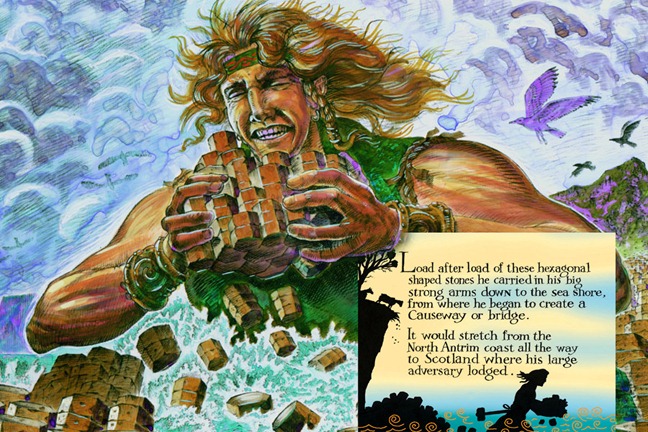