This past weekend was the thirty-sixth semi-annual Monster-Mania Convention in Cherry Hill. Okay, I think that number also counts the ones in Maryland, but still, it's been around for a while. Two of the main draws advertised on the program are John Cusack and Louise Fletcher, but neither of them did question-and-answer panels. While Beth did once get an autographed picture of Sid Haig some years ago, the lines and the cost are a bit of turn-off for meeting the guests. In retrospect, though, I do kind of wish I'd gotten something from Captain Lou Albano, what with my fascination for the Super Mario Bros. Super Show. Anyway, the first actor whose panel we did see was Kristy Swanson, who was in a whole bunch of stuff in the eighties, including Flowers in the Attic, Ferris Bueller's Day Off, and Wes Craven's story of human-robot friendship Deadly Friend. 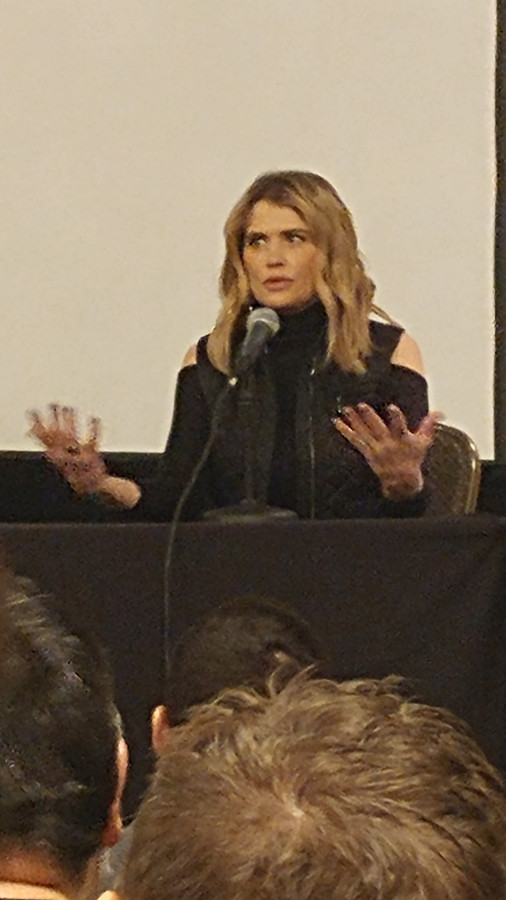 She was also in the original Buffy the Vampire Slayer movie, which I did see, although I can't say I remember it very well. My sister rented it once. I never got into the Buffy television show, which was apparently not much like the movie, although I know a lot of people who loved it. After her came Ted White, who played Jason Voorhees in Friday the 13th Part 4; and Kane Hodder, who played the role in the seventh through tenth films. 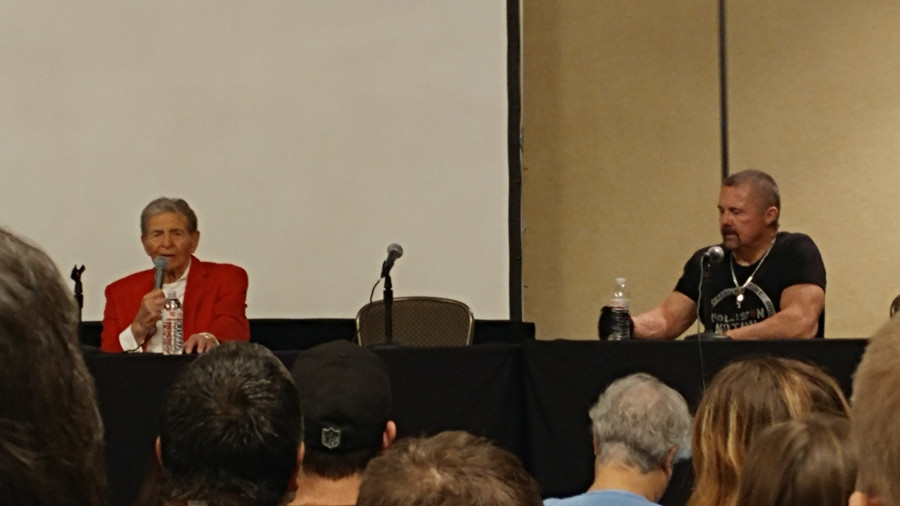 C.J. Graham, Jason from Part 6, was supposed to be there but was stuck at an in-costume autograph session. White is ninety-one years old, and used to double for John Wayne. The twins from The Shining made a return appearance, along with the guy who played Danny, who is now a college professor. 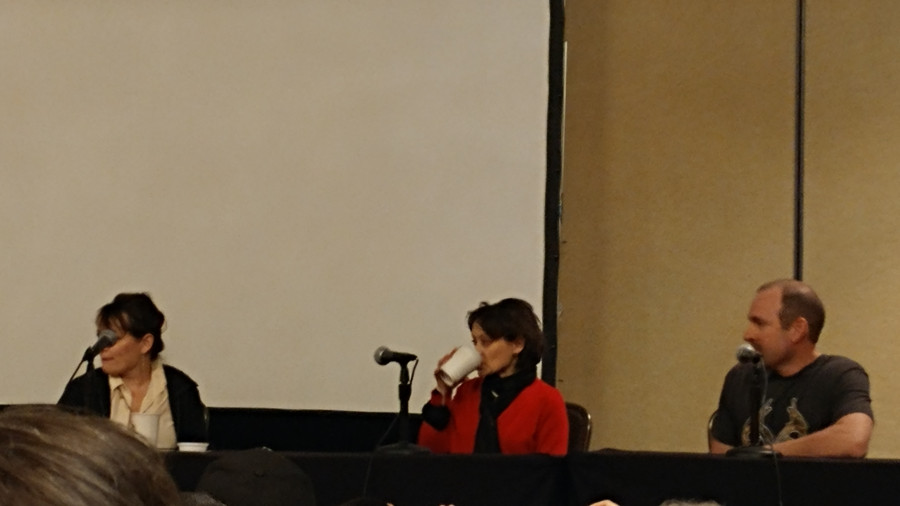 The last time the twins were there, they only gave very brief answers, but it seems like they stepped up their game a bit. They're still about as English as it's possible to be, though. The next panel had Kane Hodder return with Adam Green, not the guy from the Moldy Peaches, but the creator of the Hatchet films that star Kane as serial killer Victor Crowley. 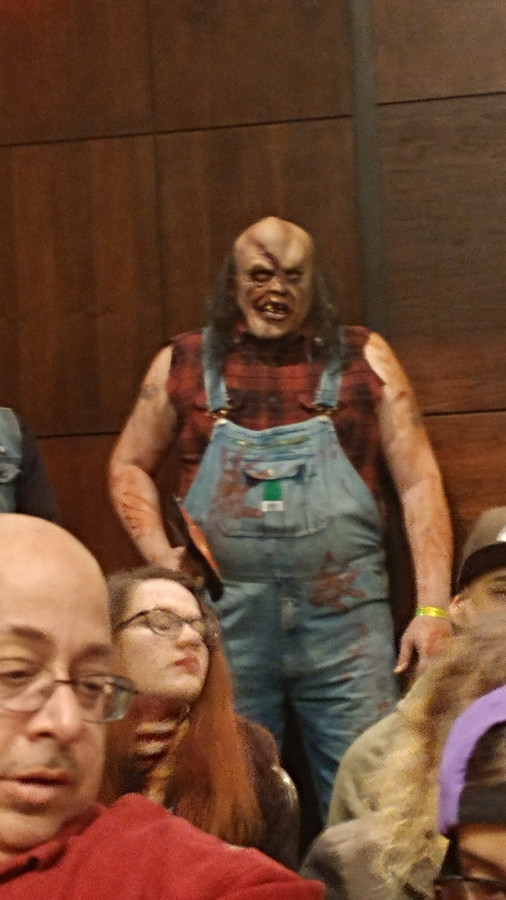 That's not Kane, just some Victor Crowley cosplay.
He had also made a movie called Frozen some time before the much more famous film of that name came out. The reunion for The Karate Kid had Ralph Macchio, William Zabka, and Martin Kove. That wasn't a horror movie, of course, but sometimes stars of other films manage to sneak in (not literally), and I generally don't mind. I'm still not sure what the big deal was about Boondock Saints, though. Oh, well. The most crowded panel we attended had three of the stars of Stranger Things, and while Beth watched the first season of that, I only saw the first episode. 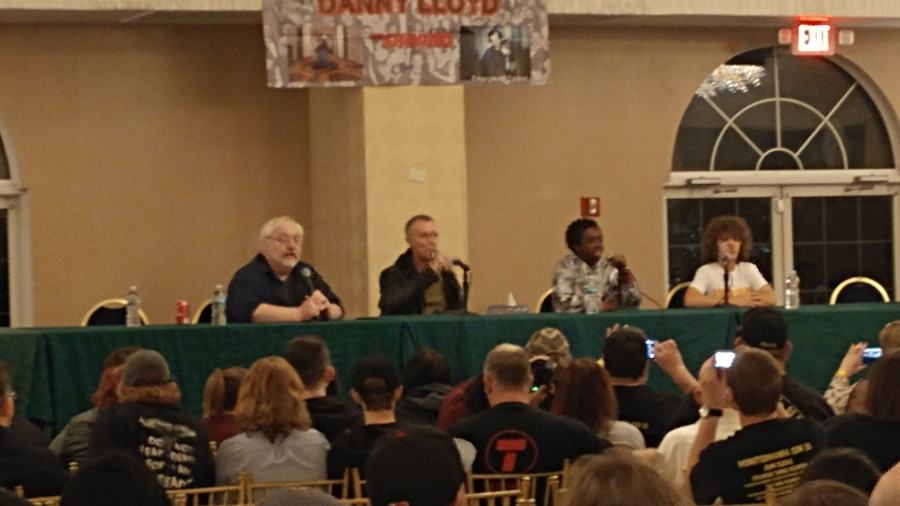 I feel kind of bad that the room cleared out quite a bit after that session when there was another one after it for John Carpenter's The Thing. Wilford Brimley was there, but I'm actually not sure where he was sitting; he wasn't behind the table with the others. It's weird how people of later generations often know actors for things other than their acting; I've seen The Thing, but Brimley is probably always going to be the Quaker Oats guy in my mind, sort of like how I knew Jane Fonda had exercise tapes before I'd heard anything about her having acted. The last panel ended an hour earlier than usual, so we had more time to get to Friendly's for dinner, as we pretty much always do. They have the all-you-can-eat shrimp again, and while it wasn't as good that night as it sometimes is, I still enjoyed it.

So what else? There's supposed to be a snowstorm tomorrow, even though it was warm several days last week. From what I've heard, work is still going to be open, but it sounds like the subways won't be running, so I might have to take the day off anyway. I guess I'll see for sure in the morning. I'm never quite sure how I'm supposed to prepare for snow, but we have enough toilet paper and don't drink milk. Well, okay, Beth takes Half and Half in her coffee, and that's similar. And we watched Star Trek VI tonight, so a review should be forthcoming. Also in the works are somewhat new looks at aging in Oz, Toad from the Super Mario Bros. games, and the newest Magnetic Fields album. I wonder if anyone will read them.
Collapse