I just got back from my second trip to Walt Disney World. The first time was with Beth for our honeymoon in 2008, which you can read about starting here. That was at the same time of year, as it was just our third anniversary, even though we've been married for twelve years. We didn't go FOR our anniversary, though. Beth had wanted to bring her Uncle John there, and her cousin Dorothea also came with us. Her uncle had never been there, and I think Dorothea only went once as a kid around the time Mickey Mouse turned sixty. Mickey and I share a birthday, but I doubt my sixtieth will be celebrated all year like his was. And he wasn't a baby in his first cartoons, so wouldn't he actually have to be older than that? I guess I'm getting into Don Rosa territory there. Also, Beth had been once without me in the interim. This time, we flew on Spirit Airlines, one of those budget companies that charges extra for everything. Fortunately, the flight was only about two and a half hours. We stayed at All-Star Movies, one of the budget resorts, which means it was still much nicer than most places I've spent the night. It was several buildings, and we stayed in the Fantasia one. There's now something they use called Magic Bands, which is a combination park ticket, room key, and way to pay for stuff. The first park we visited was Hollywood Studios, and here's what I had to say about it on my first visit. Contrary to the comments on that post, Heather did not arrange our trip. We're still connected on social media, but I haven't talked to her much recently. It was Tavie who arranged most of the reservations for us. It hadn't changed all that much in twelve years, but it's definitely gotten more crowded at the same time of year. From what I've heard, there's really no off season anymore. Both Toy Story Land and Galaxy's Edge were built since then. 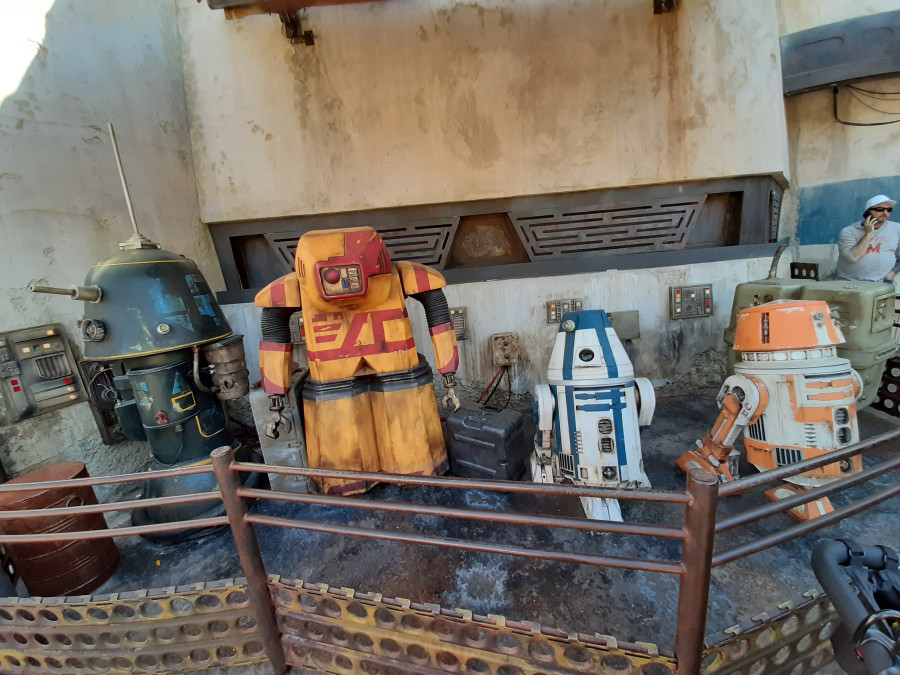 In the latter, the new Rise of the Resistance won't even let people line up without registering ahead of time. We had three FastPasses, for the Tower of Terror, the Rock 'n' Roller Coaster (which is right next to the Tower, but they were for totally different times of day), and Fantasmic. Aside from that, we went to Muppet-Vision 3D, which pretty much never has a long wait; the Alien Swirling Saucers, sort of a combination between a Whip and a Tilt-a-Whirl; and the Voyage of the Little Mermaid show. The show was an abridged version of the movie combining clips, puppets, and live actors. Fantasmic! (it officially has an exclamation point at the end, but I won't include it in other mentions in this post) was also a multimedia sort of thing including film clips, as well as fireworks and costumed characters. It took place within Mickey's imagination, and surprisingly featured a lot of content from Pocahontas. Fantasmic at Disney World started in 1998 (the Disneyland one opened in 1992), so I guess it was still kind of current at that point, although I don't know exactly what changes have been made over the years. Something I thought about was how themed attractions aren't always consolidated. I mean, I get that they can't just build anything anywhere, but Hollywood Studios has Star Tours, Galaxy's Edge, and the Star Wars character meet-and-greets in different parts of the park. A lot of movies or franchises are represented in more than one park, including Toy Story, Finding Nemo, and The Little Mermaid. We had dinner at the Brown Derby, which costs two meals on the dining plan. We were confused about the plan, as we thought it coincided with how many days we had park tickets, but it actually depends on the number of nights we were staying. This meant we had to cancel a reservation for Skipper's Canteen at the Magic Kingdom on Friday, but we also ended up having to burn up several snacks on the last day. It can be a bit difficult to arrange the non-reservation meals around everything else there is to do. At the Brown Derby, Beth had duck (does Donald approve?) and I had cioppino. 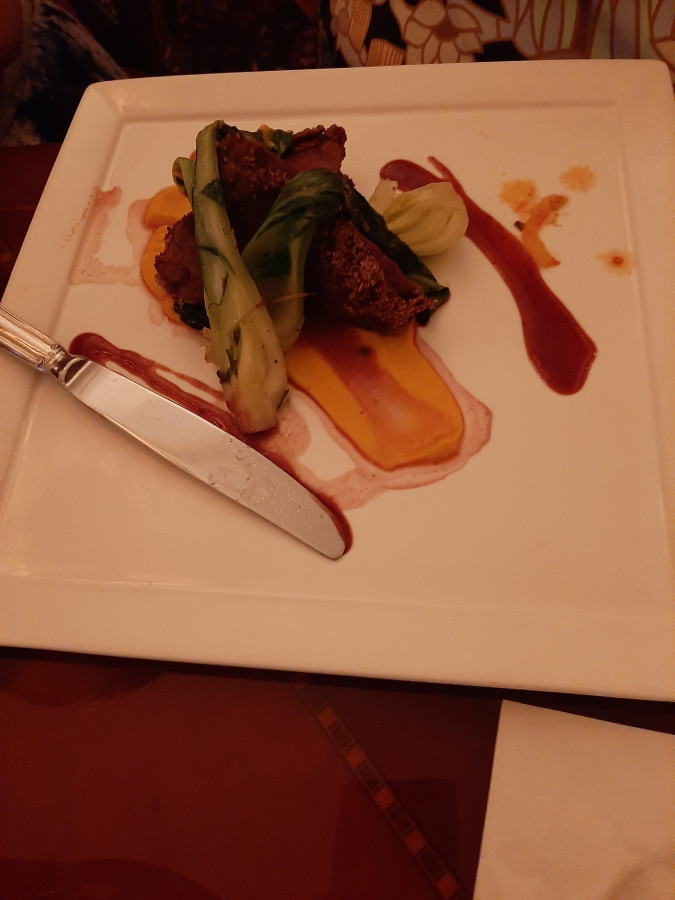 And that's pretty much it for that day, but not totally in order. That night, we learned that Stacey, the super-enthusiastic girl who hosted the Disney Must Do on the hotel TV, is still doing that. Apparently she's recorded one show annually since 2005. I can't find how old she is; I kind of assumed she was a teenager back in 2008, but I think she looks about the same now.
Collapse