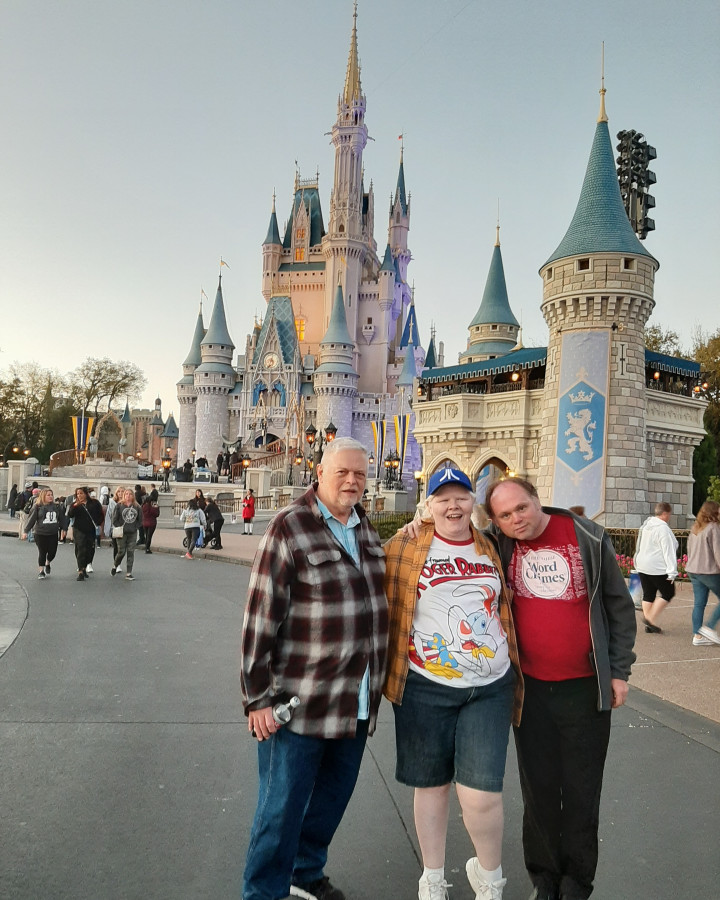 We spent our second day at Walt Disney World at the Magic Kingdom, the keystone of the place. We did a fair amount, although it's disappointing that there was so much we didn't get to do. For one thing, we couldn't go inside the castle. Other things we missed include Dumbo, Pirates of the Caribbean, Under the Sea-Journey of the Little Mermaid (not to be confused with the similarly named Voyage of the Little Mermaid at Hollywood Studios), the Seven Dwarfs' Mine Train (we knew we wouldn't have time for that one, but still, I'd like to ride it someday), and the Jungle Cruise. Speaking of that last one, we heard a boat sank there the previous day, and people were calling Dorothea to see if she was all right. Of course, we were at a different park that day. I think ducks sank the boat, so now I guess they'll have to add a scene where ducks attack the Rock and Emily Blunt in that upcoming movie. There were technical difficulties on several rides, although they didn't last long and I don't know how often such things happen. The first thing we rode was the Haunted Mansion, and people were leaving because they'd heard it broke down, but they had it up and running again pretty quickly. There's a store near the Mansion called Memento Mori, where Beth bought a new collar for Clancy. 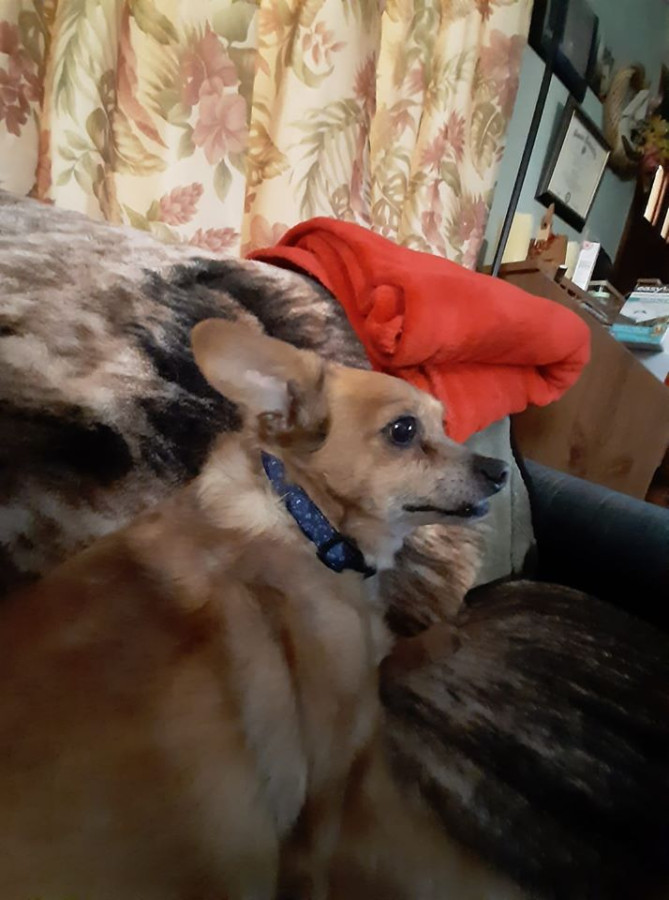 Their specialty seems to be the ghosts in bottles, but we didn't get any of those. Our FastPasses were for the Mansion, Space Mountain, and Big Thunder Mountain Railroad. After the first ride, we went to Mickey's PhilHarmagic, another multimedia show with 3D glasses (or, as Goofy called them, "opry glasses"). Despite the name, Mickey Mouse only appears at the beginning and end. Most of it centers around Donald Duck borrowing Mickey's sorcerer's hat without permission (which is what Mickey himself did in Fantasia, but maybe he's gotten his own since then), then having to chase it through recreations of famous musical sequences from animated films. We had lunch at the Pinocchio Village Haus. 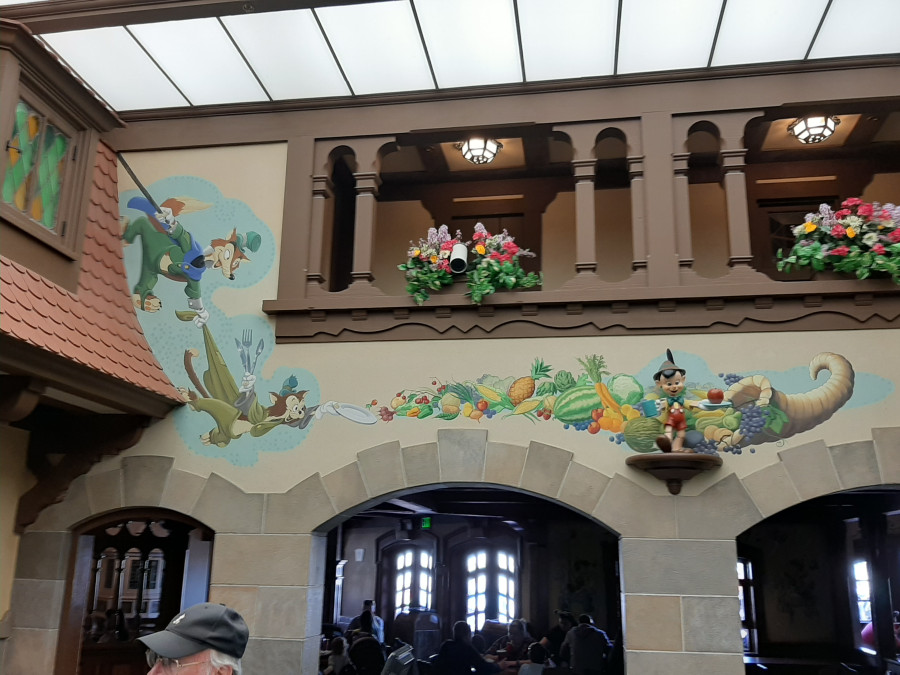 Why the German spelling for a place that serves mostly Americanized Italian food and is based on an Italian story? I guess it kind of goes along with the movie, since Geppetto has an Italian name but a bit of a German accent. Next came the Many Adventures of Winnie the Pooh, which had a long wait for a short ride. There's an application that says how long the waits are, but it was off for this one, and I'm not sure why. They did make an effort to make the line interesting, though, with a lot of stuff to see and a place for kids to play. 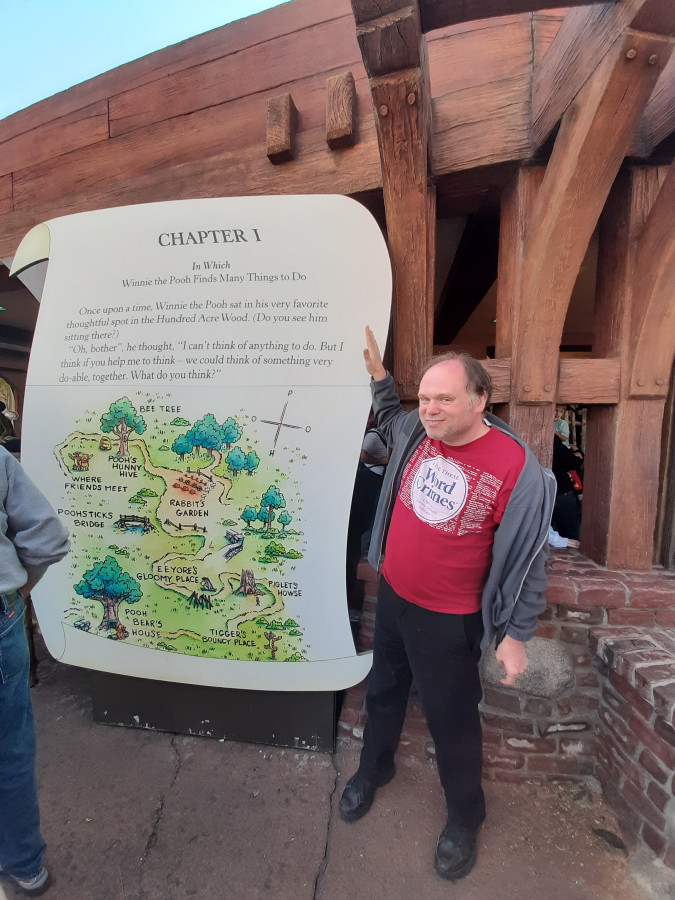 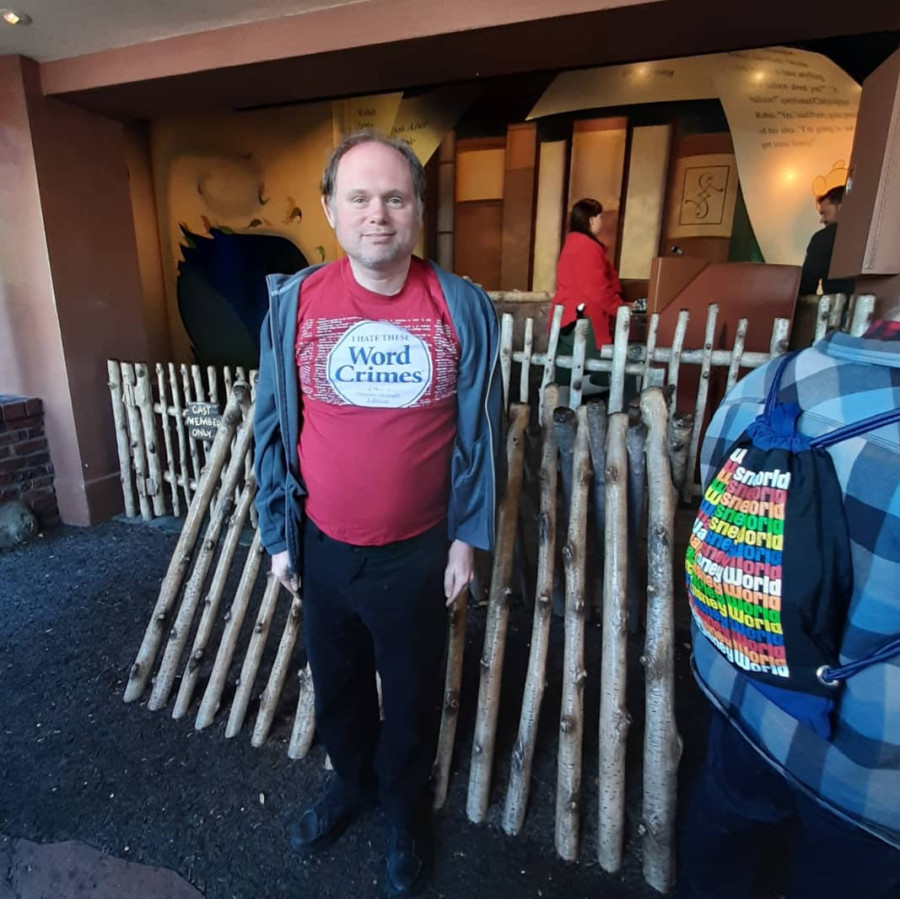 For the ride, you take a honey pot through a retelling of the Blustery Day cartoon that made up part of Many Adventures, and was in turn an amalgamation of a few different A.A. Milne stories. It includes Pooh's Heffalumps and Woozles dream, a psychedelic scene very reminiscent of Dumbo's pink elephants. Pooh was pretty much the first franchise I was a fan of, so I'm glad I got to go on this even though it was hardly one of the more exciting attractions. 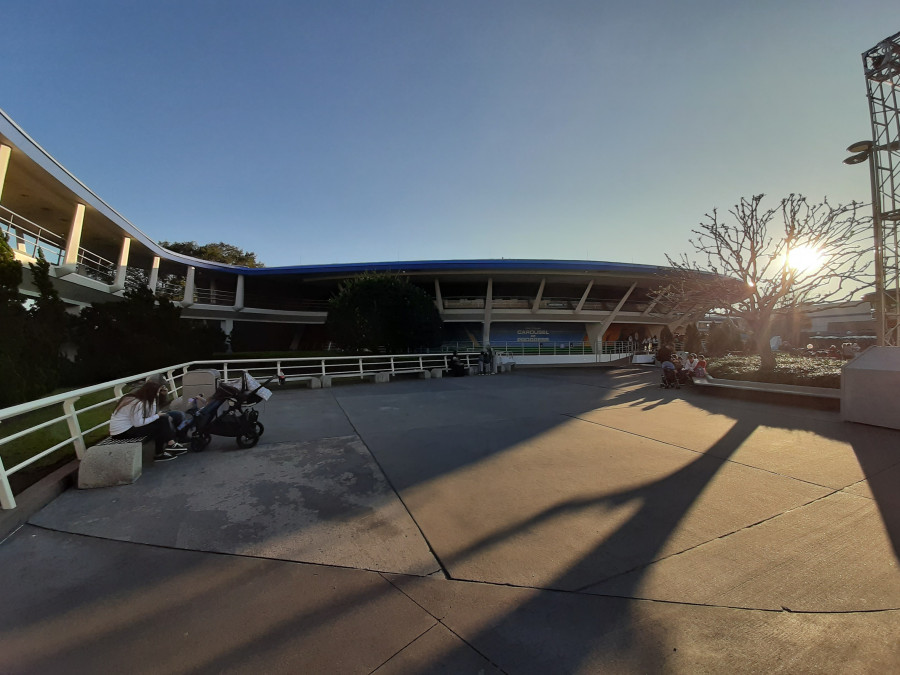 We'd somehow missed the Carousel of Progress the first time Beth and I went, although she did go on it on her second trip. It's narrated by Jean Shepherd, the guy behind A Christmas Story, and she was excited about that. Originating at the 1964 World's Fair, then moved to Disneyland and Disney World after that, the seats move between stages with animatronic families of the 1900s, 1920s, 1940s, and the twenty-first century. I believe it was last refurbished in 1993, but I have to wonder when the future segment first mentioned laser discs, which is pretty funny in retrospect. Of course, we do have media discs read by lasers, but the format specifically known as Laserdisc was a flop. The song for the show, "There's a Great Big Beautiful Tomorrow," was written by the Sherman Brothers and was covered by They Might Be Giants for the Meet the Robinsons soundtrack.

Getting back to my mention yesterday of places at the parks with the same themes, I sometimes mix up Tomorrowland with Future World at Epcot, not that you can really have too much sci-fi retro-futurism. What exactly IS a Space Mountain, anyway? A mountain IN space? A mountain TO space? We also rode the Tomorrowland Transit Authority, It's a Small World, and Splash Mountain; and visited Country Bear Jamboree and the Enchanted Tiki Room. While I'd been to the Tiki Room before, that was when they'd added Iago and Zazu to it, and they're no longer there, so it was largely a new experience anyway. And I got a Mickey waffle with strawberries and whipped cream at Sleepy Hollow, and we had some Dole Whips from Aloha Isle. By the way, it was just two days after we left that they opened a new ride at Hollywood Studios, Mickey and Minnie's Runaway Railway. We also noticed that they were building a new roller coaster (or at least that's what it looked like) at the Magic Kingdom, but I'm not sure what that one will be. If/when I go back, I'll have to try to spend more than one day at the Kingdom.
Collapse